It happens that irrespective of genres or whatever a film’s premise is, editors are always bounded to inevitable stress, pressures and deadlines. However, it sounds pretty interesting to hear such an invigorant statement from an editor, especially from a National award winner like Vivek Harshan. “Yes, Seemaraja on editing table itself was a celebrative experience. It’s quite a rarity, where the raw footages of certain films evoke the exact emotional feel that makers imagined and executed. While working on Seemaraja, there were many scenes that instantly appealed me with fun, emotions and entertainment factors even before the final edit. I am sure; audiences will have double the dose of my experience in theatres. Especially, the surprise element in the film that you had a pinch of view in trailer will be a huge toast of entertainment,” says Vivek Harshan, who had earlier edited Ponram-Sivakarthikeyan duo’s Rajini Murugan and Varuthapadatha Valibar Sangam.

Arriving from the celebrated stores of producer RD Raja’s 24AM STUDIOS, Seemaraja is scheduled for a grand worldwide release on September 13 for the festive occasion of Vinayagar Chathurthi. Featuring Sivakarthikeyan and Samantha in lead roles, the film has much more entertainment bonanzas that include hilarious quotients by Soori, an unconventional avatar of Simran and so on.

Comprised with the team of Sivakarthikeyan’s lucky mascots – D Imman (Music), Balasubramaniam (Cinematography) , Vivek Harshan (Editor) Yugabharathi (Lyrics) and many others have already made the expectation bars raised. 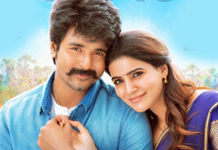