Prashanth is back after hiatus playing the lead in Saagasam. An action-packed entertainer with enough twists and turns, the movie is a colorful visual treat to Tamil fans. Making a comeback for an actor is no easy task. Three cheers to Prashanth, who seems to have given his best. He fits the bill well. He begins from where his left in his heydays. Saahasam is fun-filled film that is perfect for a versatile actor like Prashanth to make his return.

Saagasam revolves entirely around Prashanth, who is a fun-loving and free-spirited youth who wants to make quick money without much hard work. He is smart and believes in his ability to lead him to all success.

The story takes a twist when he meets a gangster who steals a large sum of his money. The hero’s concept on work and the duel between the gangster and the hero form rest of the story. Prashanth is a real scene-stealer. He dances well, emotes good and comedy sits well on him. In Saagasam, he is playing a character which is more brainy than brawny. His special skills to elevate comical sequences comes handy at many places. Amanda is more beautiful and bubbly. Nasser and Sonu Sood have a meaty role to do. Thaman’s music is foot-tapping and his background score goes well with the story.

Cinematography by Shaji Kumar is catchy and colorful. Splendid is the word as he captures lush green locales well. A crisp editing by Zashi Omer makes the movie interesting. Though the movie is inspired by Telugu hit Julayi, the movie has been given enough twists and turns to suit Tamil audience by director Arjun Raj Verma. The movie has come good and would be a perfect treat for Prashanth fans.

Saahasam – Appeals all the way 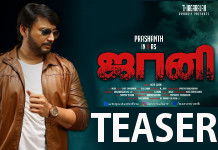