Hero Sai Ram Shankar is making a comeback with an out and out action entertainer being directed by first timer SS Murali Krishna. To be seen in a hilarious and action-packed role, Sai Raam Shankar romances Rashi Singh in the film.

The film is titled crazily as Resound and it sounds massy. The shoot of Resound resumes from today in Hyderabad. As of now, 70% of the filming is completed. With this ongoing schedule, major portions of the film will be wrapped up.

Suresh Reddy, Ayyappa Raju and Raja Reddy are jointly bankrolling the project with Sai Prakash handling the cinematography. The film has music by Sweekar Agasthi. 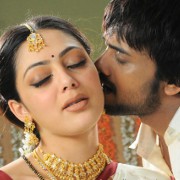