Simbu who quit social media because of negativity has returned. Upon his return, Simbu posted a video called ‘Athman’ and this has taken the internet by storm. It’s all about physical transformation from fat to fit.
From common people to many celebrities appreciated the video and they have shared it on social media. Not just on social media, Simbu is going to get busy with back-to-back films. As of now Simbu has three films in hand and they are with directors Suseenthiran, Venkat Prabhu and Narthan.

With Suseenthiran is a village backdrop movie while Venkat Prabhu’s film is a political thriller titled ‘Maanadu.’

With director Narthan, it is remake of Kannada film ‘Mufti.’ Apart from this there is strong buzz in Kollywood circles that Simbu might team up Universal Hero Kamal Haasan in ‘Sigappu Rojakkal.’ But an official announcement is awaited.

Overall Simbu who has transformed remarkably is very enthusiastic to be back in films. 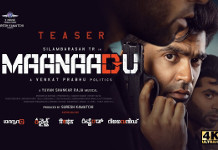