Amid much expectations, Kaala teaser starring Rajinikanth and directed by Pa Ranjith was released recently.

The movie is slated to be released on 27 April, however with the ongoing Tamil Film Producers Council strike, the film was not censored.

However, the TFPC recently gave the green signal for the movie to be censored. Now sources say that the movie has been given U/A certificate with 14 cuts.

The 1.40 minute teaser is a feast for fans and has everything that the audience would have wanted to see.

Rajini’s style in the teaser is top notch and fresh as ever. The punch dialogue ‘Kya Re Setting ah?’ which the superstar mouths in Nellai slang mixed with Hindi has become viral already.

Like all the previous Ranjith films, the teaser of Kaala too has more political elements and brings out the voice of the suppresed.

The movie is bankrolled by Dhanush’s Wunderbar Films. 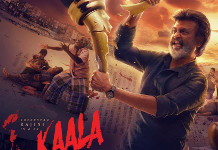