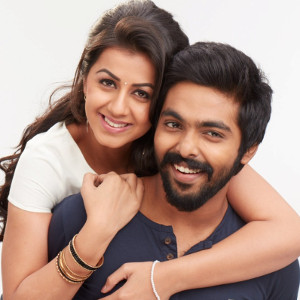 Kadavul Irukan Kumaru is a first of many things. The combo of Rajesh-GV Prakash, ‘U’ certificate for a GVP movie, No Santhanam and drinking scene in a Rajesh movie are a few to be mentioned.

While GVP’s earlier movies were for the young audience, KIK is aimed for people of all ages.

This is a road movie in which GVP and his friend RJ Balaji travel to Pondicherry for the former’s bachelor party. The events following form the rest of the story.

Prakash Raj is back as a cop in the movie and has proved he is a performer who can portray different emotions with ease.

GV Prakash has improved a lot from his previous movies and director Rajesh has got the best out of him.

There is very less scope for Nikki Galrani, the bride of GVP and Anandhi who comes in the flashback as his former girlfriend.

The director has made use of the latest incidents to induce comedy and most of them have worked well, while some of them are not that good.

On the whole, the movie is a fun ride and can be enjoyed.