Mass Hero Vishal’s next is in the direction of Suraj produced by young producer G.Hari under his ‘Hari Venkateswara Films’ banner and presented by M.Puroshattam. ‘Okkadochadu’ has been confirmed as title for this big budgeted film. Recently a big chase with a budget of 1.5 Crores has been canned under the supervision of fight master Kanal Kannan. This chase will be one of the major highlights in this film. Vishal’s introduction song is lavishly picturised in sets erected at Pondichery under the supervision of dance director Sobhi. HipHop Thamizh has given another super hit audio for this film.

Producer G.Hari said,” ‘Okkadochadu’ is perfect commercial film with a right mix of Action,Entertainment,Music. This is the highest budgeted film in Hero Vishal’s career. Entire shooting of the film will be completed with 10 days schedule of talkie part in september. Two songs will be canned in Russia. We will release the first look on August 19 and Teaser will be released on August 29th on the eve of Hero Vishal’s Birthday.Audio will be out on October 9th and we are planning to release the film worldwide on October 29th.”

Along with Hero Vishal and Thamanna, Prime Star Jaga/pathi Babu will be seen as main villain in this film.Sampath raJ, Charan, Jaya Prakash will be seen in other important roles. 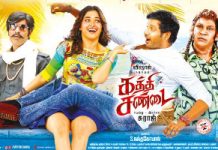