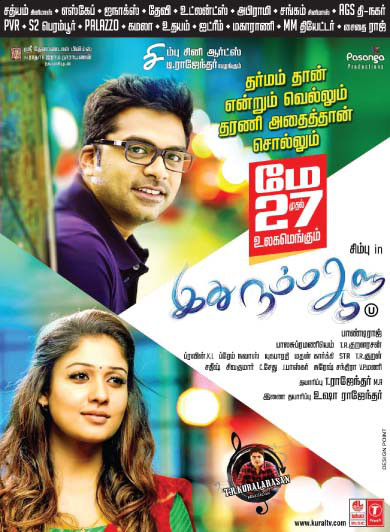 ‘Idhu Namma Aalu’ has finally got a new release date. As per the latest update from the movie’s makers, the Simbu-Nayanthara starrer flick will hit the screens on May 27.

“Idhu Namma Aalu will sure get released on May 27. There won’t be any more delay,” said those associated with the project. Directed by Pandiraj and bankrolled by Pasanga Productions in association with T Rajendar, the film has music by Kuralarasan.

Andrea Jeremiah, Soori and Jayaprakash portray key roles in ‘Idhu Namma Aalu’, which is tipped to be a feel good entertainer that talks about love before and after marriage.

It may be recalled that in January 2015, Pandiraj tweeted about his annoyance at Kuralarasan’s delay in providing the film’s music and stated that a planned teaser scheduled for the month had to be delayed. The director and music composer later exchanged tweets blaming each other for the slow progress of the film.