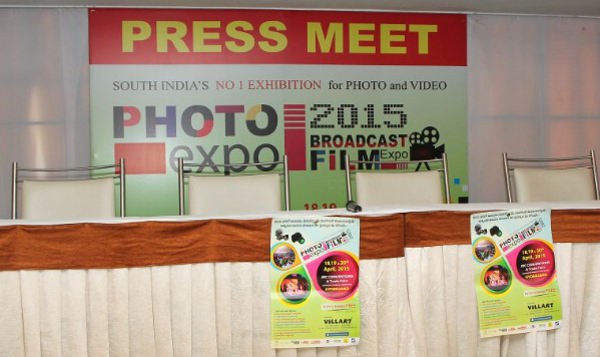 Pentax 645z, Datacolor Spider 5 and few world popular products from UK will be launched for the first time in India at Photo Expo & also available at reasonable prices for Indian Customers.

Press Release:
Hyderabad, 17thApril, 2015: TUe most successful and sought after event for the imaging industry in the two Telugu States of Telangana and Andhra Pradesh, ‘Photo Expo’ and ‘Broadcast & Film Expo’, two concurrent three-dayexpos are to kick off in Hyderabad city tomorrow. To be held from 18th to 20thApril,2015 at JRC Convention Centre, Name Road, Adjacent to Whisper Valley, Film Nagar, Jubilee Hills, Hyderabad. The two concurrent expos spread over 90,000 sft. area will have over 100 stalls by major brands from the industry showcasing their upcoming as well as existing line of products and services.

Veteran Film Star Sri Mohan Babu and Lakshmi Manchu will be inaugurating the expo on 18th March at 10AM. Organised by city-based Villart Photography, the event is to be participated by over 100 exhibitors from across India brands including Sony, Canon, Pentax, Photoquip, Monarch, Data Color, HP, Epson, Printonica, Apple, DELL, Digiquest, RAFT, Flex Core, Foton, Strobeam, Vibesta, Kailiteand others.

The objective of this exposition is to act as a comprehensive resource for the industry, its members, prospective business visitors and customers by providing in depth information about the industry and the latest trends influencing its progress informed Ramana of Villart, the man behind the exhibitons while addressing the press conference here in city today.

Being attended by prominent Photo and Video companies, equipment manufacturers and vendors, the expo offers participants an opportunity to build network, learn about new technologies and techniques, exchange ideas and discuss about industry trends. All participants can benefit from great exposure to enhance their revenue streams and increase profits as this expo provides a fabulous opportunity to reach out the maximum Photo &. Video professionals of South India, Ramana added.

It is the 20th Expo to be organised all over India and 14th in Hyderabad. Villart had earlier organized such events at Hyderabad, Karnataka, Kerala and West Bengal. The expo is almost synonymous for photography, broadcast and Film both states Telangana and Andhra Pradesh. A slew of products from various brands in the respective industries will be on display at the three-day event declared Mr. Villa Venkata Ramana, Managing Director, Villart, the organizers. Over 40,000 people including students, professionals, businessmen, enthusiasts, Armatures, etc. from the Photo, Video, Broadcast and film fields from across Telangana, AP, parts of Karnataka, Tamilnadu, Kerala, Chattisgarh and Maharashtra and all over India are expected to visit the expo during the three days.

The entry to the expo is free for ALL with valid ID.

The event also offers an opportunity for the photographers and videographers to enhance their skills by way of learning sessions and workshops, informed Mr. Venu Bhagavan, Director, Villart. Various free seminars / training sessions, etc. organized for the benefit of the industry professionals such as Seminar on Photographers Psychology, Art of Lighting, a 2 days practical workshop; Portraits Portfolios; Tips on Wedding Photographyand others. These training programs and workshops will be conducted by industry veterans.. Art of Lighting will be organised by SONY. Some of the experts who will address these sessions include HariMahidhar, Seminar on Candid Photography and tips will be conducted by Padma Pothukuchi.Business & Personality Development for Photographers by Mr. Venu Bhagawan and Seminar on Adobe Light Room by Mr. S.K. Hussain. Photo fun opportunity is held on all 3 days. In International pavilion live demo with models, wherein Photographers can click pictures and apply what they had learned at the learning sessions & hone their skills as well as for entertainment.

Other unique features of the Expo include launching of products such as Pentax 645z, Datacolor Spider 5 & world popular products from UK for the first time in India at Photo Expo & also available at reasonable prices for Indian Customers.

First time an Online Photo Contest is being organised. Several photographers from across south India sent their entries. The same are displayed on FACEBOOK page of the Expo. The entries which has maximum likes on the page will be displayed at the Expo and they will be recognised for their excellence.