This is Pawan’s first Collabration with Sithara Entertainments banner and he will be seen in a powerful role loaded with mass elements and charishma.

Young and talented director Saagar K Chandra will wield the megaphone for this project while happening music composer Thaman will be providing music and background score.

Top technicians like Prasad Murella for cinematography, Naveen Nooli for editing and AS Prakash for art department have been signed for the film. The makers will soon sign the rest of the cast and crew. The shooting details would also follow. 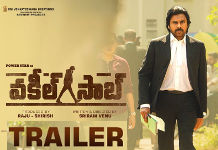