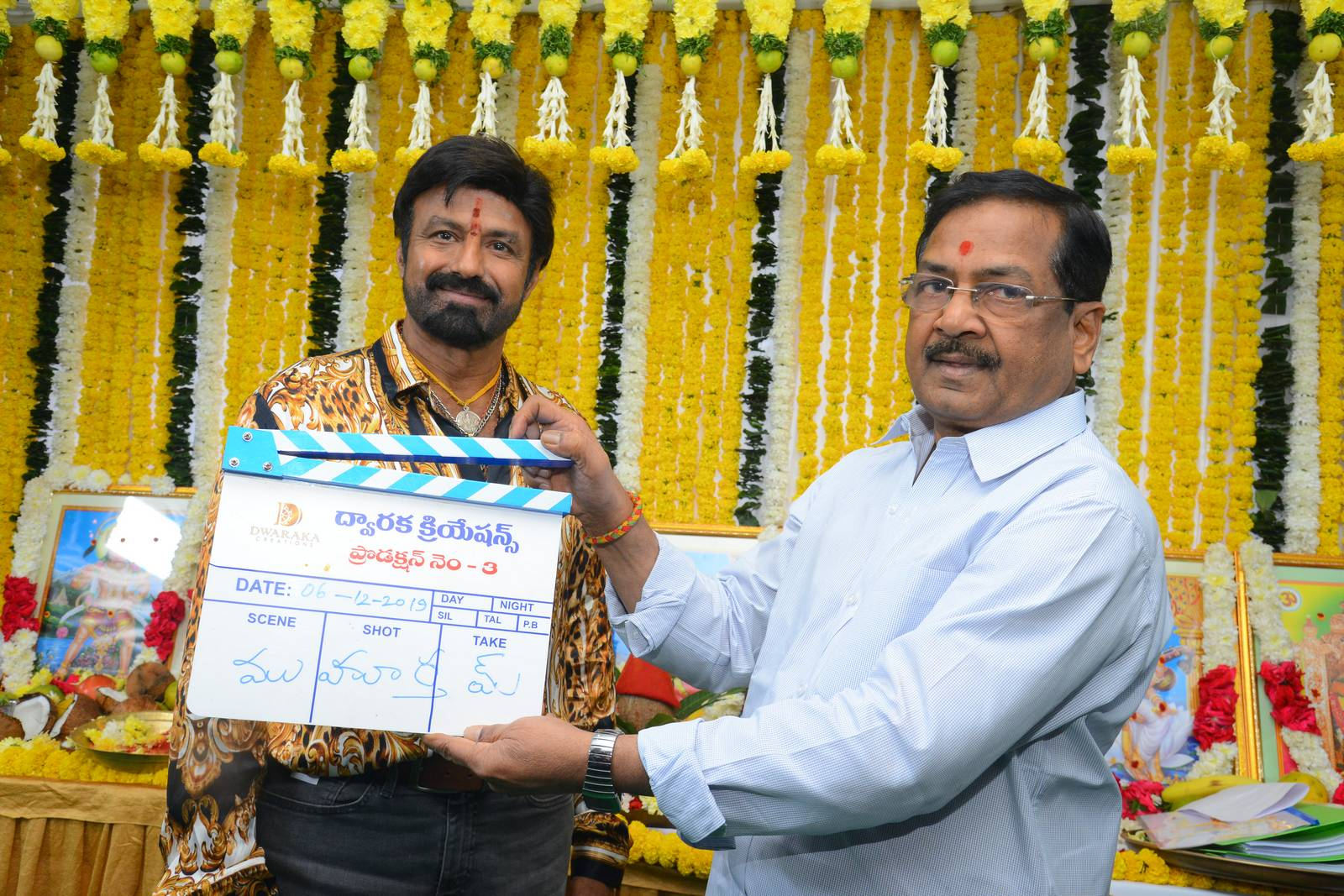 After Blockbusters ‘Simha’, ‘Legend’ Natasimha Nandamuri Balakrishna, Boyapati Srinu are coming again together for a new film to score a Hat-trick. This prestigious project is launched with a grand Pooja ceremony. Miryala Ravinder Reddy is producing this film under Dwaraka Creations banner. Popular Director B Gopal gave the First clap for the muhurtam shot while Popular Producer Ambica Krishna switched on the camera. The First shot has been picturized on Natasimha Nandamuri Balakrishna uttering powerful dialogue in his unique style, ” Nuvvoka Maatante adi ‘Sabdham’, Ade Maata Nenante Adi ‘Saasanam’… Check In The Public”. Popular Producers C Kalyan, Sivalenka Krishna Prasad attended the event. The team has addressed media in a press meet.

Natasimha Nandamuri Balakrishna said, ” Today is an auspicious day. The film everyone is eagerly waiting for in My and Boyapati Srinu’s combination Produced by Miryala Ravinder Reddy garu in Dwaraka Creations launched today. My films, ‘Simha’, ‘Legend’ which were made with Boyapati Srinu scored super success. Our combination usually carry a lot of expectations among the audience and fans. But, Me and Boyapati believe in ‘Gatham Gathaha’. We won’t talk about our previous films and concentrate in our next film only. M Rathnam gari story, dialogues will be too good. We carry the responsibility to deliver what audience expect from us. ‘Simha’ and ‘Legend’ became blockbusters as we feel and fulfilled that responsibility. This films story has freshness and also has spiritual angle to it. Some stories were made out of a character and some comes from one’s personality. But, stories from our combination mostly come from our aggression. The story has shaped up superbly. Industry needs good young producers like Miryala Ravinder Reddy. I can assure the audience and fans that we will deliver a very good film in our combination.”

God in the form of Police has punished the criminals today.
Speaking about Encounter of Disha’s Killers, ” The miscreants who did henious act and killed Disha were encountered today. Nanna garu, Anna Nandamuri TarakaRama Rao garu has given many message oriented films and tried to uplift moral values in the society through his films and various mediums. I also conveyed the message, ‘There will be no creation without a Woman’ in my film ‘Legend’. Many ghastly incidents towards women are happening throughout out country. The God in the form of Police has done justice and punished the criminals today. This encounter carried out to instill fear among those who will try to do such crimes in the future. This should be a lesson for everyone. I appreciate Telangana Government, Police Department for taking this step which will stop to even think about doing such inhumane things. Disha will rest in peace now. I offer my deepest condolences to her family.”
Mass Director Boyapati Srinu said, ” This is my second film in Dwaraka Creations banner. This is my hat-trick film with Balayya Babu. ‘Bhadra’ was my first film in the industry. My career began with a very good film. It takes a good turn with ‘Simha’. ‘Simha’ and ‘Legend’ became biggest hits. This hat-trick film is my responsibility. I will make sure to surpass those two films with this film and fulfill my responsibility.

One can escape from Pollution but not from Police
Speaking about Disha’s Killers Encounter, ” While everyone in our country is mourning for the death of Disha, it’s good to hear that the justice has been served by the police with this encounter. Everyone should remember that one can escape from pollution but no one can escape from the Police.”
Producer Miryala Ravinder Reddy said, ” I might make many films in the future. But, producing a film with Balakrishna Garu is always an honour for me. I promise that this film after its release, Balakrishna Gari Fans will also witness such respect from everyone who love cinema.”