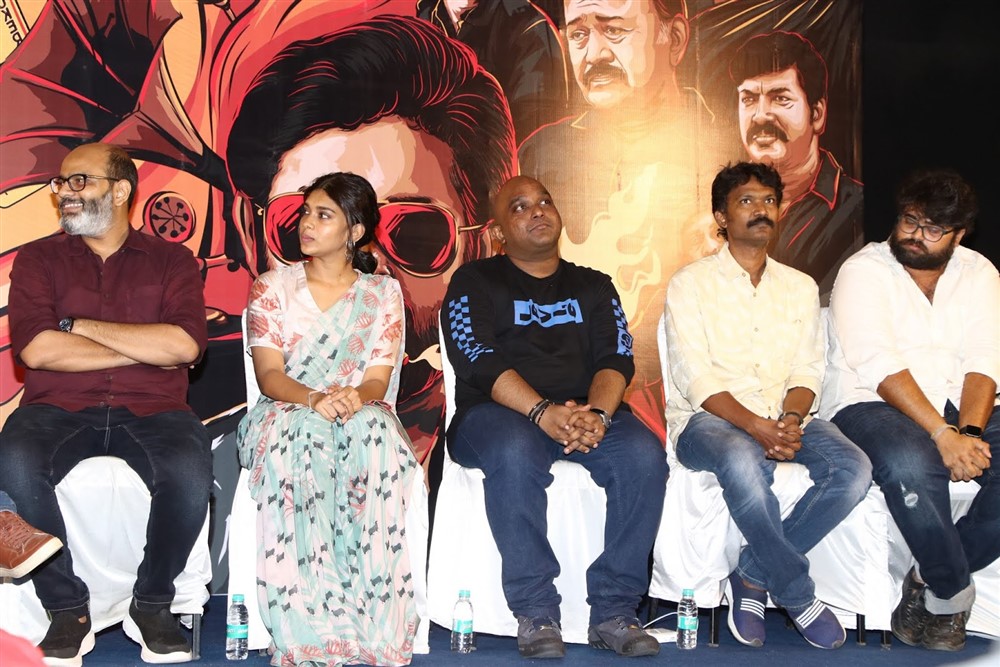 Everything begins with a title and the film’s attractive quotients are deeply adhered to them. In this aspect, ‘Bodhai Yeri Buddhi Maari’ has already captured everyone’s attention. With the film’s worldwide release scheduled on July 12, 2019, the cast and crew of this film had its interaction session with press and media. The film is produced by Srinidhi Sagar for Rise East Entertainment with Chandru KR making his directorial debut with this film. The film features Dheeraj, Dushara and Pradhayini Surva in lead roles with prominent actors included in the star-cast. KP is composing music for this film with Balasubramaniem handling cinematography.

Here are some of the excerpts from the film’s press meet.

Producer Srinidhi Sagar said, “There have been lots of resentments and criticisms for the title “Bodhai Yeri Buddhi Maari’, but we were firm about not going for the changes. I had come across lots of narration and felt everything to be stereotypical. When Dheeraj narrated me an one line story, I was pretty impressed and asked for complete narration, which surprised me for the unpredictable screenplay. Cinematographer Balasubramaniem sir has been really helpful and cooperative throughout the shoot despite having lots of challenges. Actor Dheeraj is a doctor by profession and has exerted an impeccable effort. The musical score by KP has escalated the film to next level. Pradhayini and Dushara are beautiful and excellently talented heroines, who have done a colossal job. As confirmed, Bodhai Yeri Buddhi Maari release date is one July 12th, 2019.”

Editor Sabu Joseph said, “This is a film that comes from us, who have been friends from school days. For any debut filmmaker, cinematography happens to be the most prominent support and Balasubramaniem sir has been a boon to all of us. After knowing that he is going to be a part of this film, my faith on the film’s success increased.”

Actor Aashiq said, “I was standing outside a multiplex after watching “Seema Raja” and that’s when I got a call for this film. Initially, I was reluctant and doubtful thinking that someone is playing pranks on me and was completely surprised to get the offer to work with such a great team. Director Chandru sir is so silent, calm and focused. This film is definitely a different attempt and will be liked by all..”

Music director KP said, “I have had a great passion for films right from the time of school days. Both myself and Dheeraj have been close friends from that point. He would often tell me that I will be the music director, if he is working in a project and our dreams have come true now. Although Dheeraj is a doctor, he performed like a proficient actors. Pradhayini is a super model and has done a fabulous job with this film. I could easily predict that BGM process is definitely going to be definitely an exciting one and as expected, it had such scope for me to work the best. We are happy about the way, the film has shaped up.”

Cinematographer Balasubramaniem said, “Dheeraj was introduced to me through Udhayanidhi sir. Both of them have done an unforgettable help for me. When my wife had a critical health issue, it was both of them, who stood by me. Udhayanidhi sir stayed by me for the whole night when the surgery was performed by Dheeraj and they saved my wife and I worked in this film as a token of showing my gratitude… The film has come out really well.”

Actress Dushara said, “Becoming an artiste has been my childhood dream and I am happy that it has happened now with Bodhai Yeri Buddhi Maari. Although, my screen time is little, I have got a prominent role to play here in this movie.”

Model-actress Pradhayini said, “I never had interest in films and didn’t go for the option of hearing scripts. When director Chandru approached me, I wanted to give a try and gave a nod. I took some training from Mime Gopi sir. It was a new experience to face the camera here. Bodhai Yeri Buddhi Maari is a film that will keep everyone guessing what’s next and am sure just like me, it will be surely liked by all.”

Director KR Chandru said, “I got a fascination for filmmaking and was involved in short films. That’s when I got an idea to direct a film and expressed the desire to Dheeraj. While narrating the film to Balasubramaniem sir, I was literally nervous and yet he propelled his encouraging words upon me. The story is set against the backdrops of a single house and all the artistes have given an impeccable show. Telugu actor Ajay is playing an important role in this film. Sound Mixing happens to be one of the major aspects of this film and the entire technical team has been more supportive in enhancing the film’s impact. The film will be significantly cohesive to the title.”

Actor Dheeraj said, “I had a great passion for acting right from my childhood and was waiting for the right opportunity. At the same time, I didn’t want to give up on the profession of doctor that I pursued. Everyone here are citing that we as school students have made a film. If so, our headmaster is none other than Balasubramaniem sir. If not for his support, this film would have not been possible. We are releasing the film on July 12, 2019.”