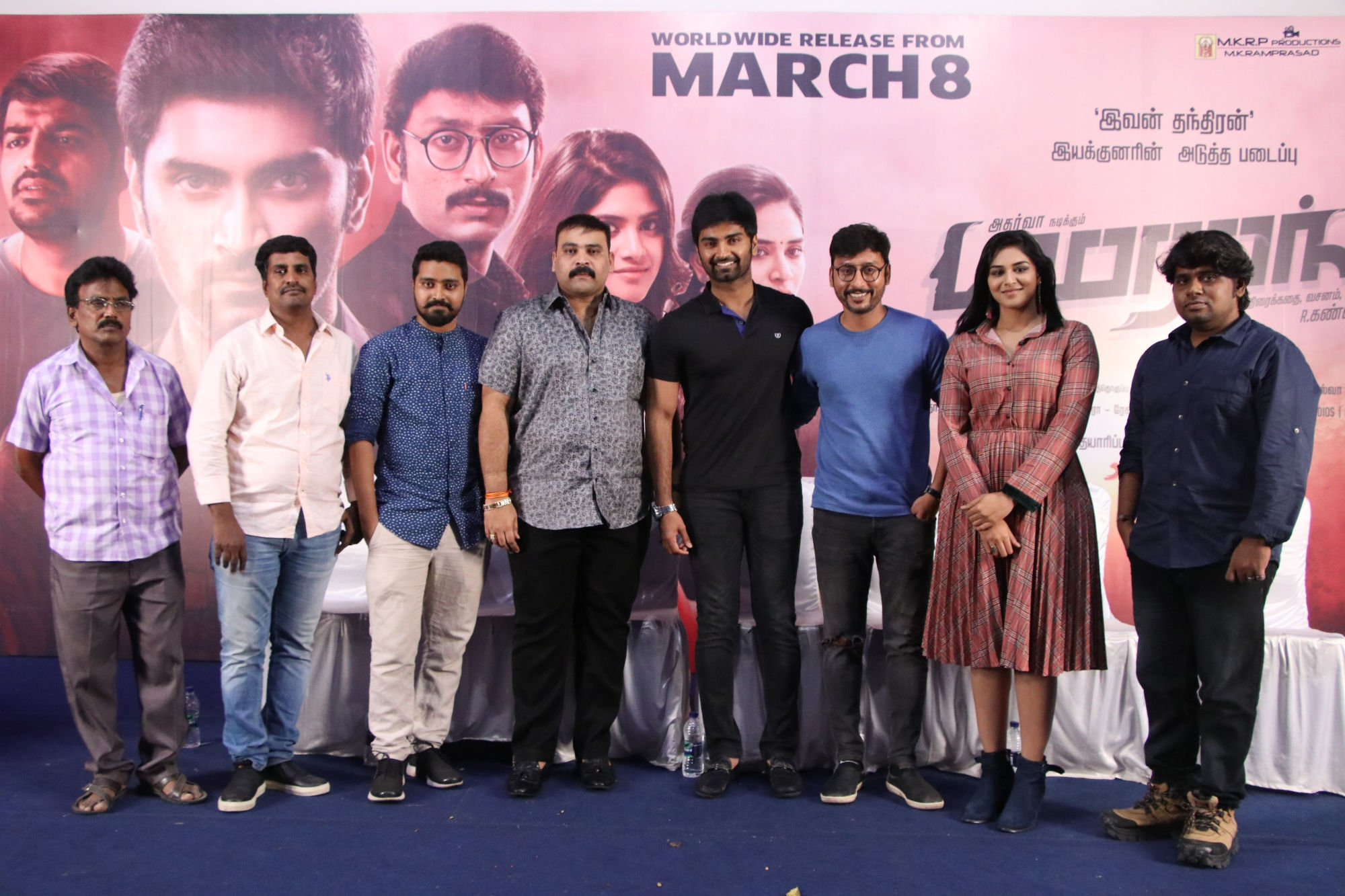 The Atharvaa Murali-Megha Akash-Induja starrer “Boomerang” team has its Interaction with Press and Media, where they shared some of the most important facts and experiences of working as a team. He event commenced with the screening of trailer and couple of songs. Produced by Director Kannan for Masala Pix, Boomerang is scheduled for worldwide release on March 8

RJ Balaji said, “The origin of LKG happened on the sets of Boomerang. My friendship with Atharvaa Murali got very much acquainted through this project. He was the first one to encourage me on LKG as he suggested me selflessly to write my story for LKG. Now I am curiously waiting to complete my other script and direct him. I don’t know whether it will be happening anytime sooner, but I am sure this will be a reality. My friendship with Kannan sir started from the time of Settai, which was actually a clash and then we got more friendly as he got me onboard for Ivan Thanthiran. My role in this film too is substantial and it’s going to be good as a film as well. This is a socially relevant movie as Kannan sir touched a much realistic story, which revolves around connecting all rivers across our country. It was really a great experience working with two Tamil speaking heroines – Megha Akash and Induja who are really talented.”

Cinematographer Selva said, “Since I have already worked with Kannan sir in Ivan Thanthiran, it was really nice working with him. I am thankful to him for bringing onboard for this film. Every actor has done excellent justice to their roles.”

Music Director Redhan said, “Soon after the release of Arjun Reddy, I got a call from Kannan sir appreciating my work and when I met him, I was completely surprised to see him offer me to compose for Boomerang. I am sure, much alike LKG, Boomerang will be definitely regraded as a good social awareness film. When composing BGM, I was totally spellbound over the screen presence and performance of Atharvaa Murali.”

Actress Induja said, “Although reluctant at first, I got so much fascinated by the basic plot and by the completion, I was totally happy. Everyone on the sets kept me so much comfortable. Kannan sir gave me complete freedom to act in own style. I became a fan of Redhan from his musical score of Arjun Reddy and he has done a fabulous job for this film.”

Atharvaa Murali said, “We as a team are completely in awe as it was completed in a much quick span though there were lots of drama was shot. Many have been asking me the reason behind titling the movie as BOOMERANG. The premise is simple and it’s all about Karma. Many here for having terming this film as agricultural one, but there are lots of ingredients included. I got to know about lots of things like face transplantation. Our industry lacks lots of Tamil speaking heroines and am sure Induja and Megha Akash are really talented. I am sure audiences will thoroughly enjoy the film.”

Filmmaker Kannan played a perfect host, where he kept bringing in some interesting information about the film. He tendered his vote of thanks to all for the completion of film on time including financiers Pankaj Mehta, Anbu, Ram Prasad and his father Murugesan. I am thankful to Trident Arts Ravindran for setting us the theatres for
Release. He credited all the thanks to the entire technical team for being the pillar of this film. Kannan never missed anyone including his co-directors and assistants for being a great support.