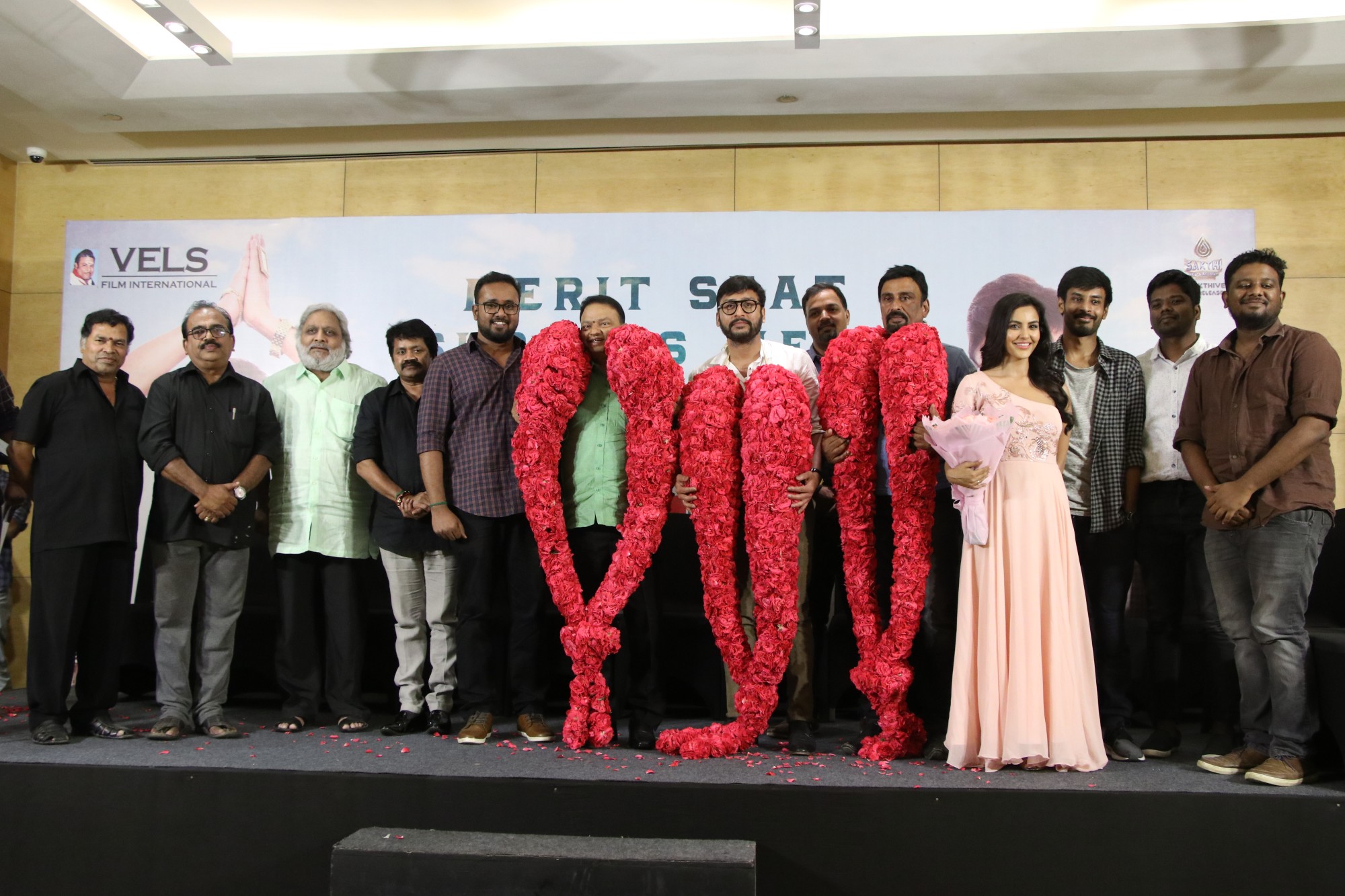 Unlimited emotions and happiness happened to be the commonality found among the entire team of LKG as they are relishing the success of the movie. It’s a rarity to see a film winning both commercially and critically. Here are some of the excerpts from the occasion.

JK Rithesh said, “As I said earlier during the pre-Release event, I am so much glad to be a part of this film and if not for the hard work and creative abilities of the entire team, especially RJ Balaji, the film would have not made so much success.”

Actor Ram Kumar said, “Balaji’s talent needn’t be revealed by me now as the film’s success itself has made it known to everyone else. As a producer, I am so much happy that producer like Isari K Ganesh has been a gift to Tamil industry and such personalities are really the need of hour to promote and encourage young talents. Everyone in the team has done a marvellous job. Music Director Leon James’ father Noel has been my close friend and to see him as second generation here in the industry is a good scenario. Cinematographer has done a remarkable job where we would usually see a LIC building when an establishing shot of Chennai is shown, but to see him handle camera, it was like watching a cosmopolitan city like Newyork and Mumbai.”

Music Director Leon James said, “I thank Isari K Ganesh sir for giving him an opportunity to be a part of this film. Big thanks to RJ Balaji too and his creativity is phenomenal that is now being appreciated by everyone. I congratulate him on this success and wish him more victories with lots of successful projects.”

Cinematographer Vidhu said, “Listening to Leon James music was like that of AR Rahman sir’s works in 90s. RJ Balaji and Priya Anand have been so much supportive and they made me feel so much comfortable. I thank Isari K Ganesh sir for being so much supportive in giving what all was required for the film.”

Actor Mayilsamy said, “These days, it’s a speculative situation, where it has become a difficult thing to release a film. Even if released, it turns out to be a tough situation to have a successful run despites being a good one. In this critical juncture, I am so much happy to see that LKG has outperformed in contrary to such scenarios. As the banner says – MERIT SEAT SUCCESS MEET, the film has been evidently proved of such paradigms. It’s all because of hard work by entire team and great support of producer Isari K Ganesh. Today, making good movies based on political genre has become a need of hour and am consistently taking up movies that belong to such genres. Priya Anand has been so much down to earth and has been really a loveable person to work with and so have been others in the film..”

Lyricist Pa Vijay who spoke on the occasion said, “I am really happy to be a part of this success meet. I thank each and everyone especially RJ Balaji. Starting his journey as a Jockey, he knows what the best formula to score success points. Although I have written so many songs across the years, only few remain close to heart for ages to comes and RJ Balaji has given me an opportunity to pen such a song, which is Tamizh Anthem.”

Think Music Santhosh said, “For many reasons, the producer sir has been blessed with good team. We are welcoming Leon James into our family and his musical score for Tamizh Anthem gave me Goosebumps when I heard it for the first time. Thank you Leon for such a good music it will remain to be a catalogue for us.”

Politician turned actor Nanjil Sampath came up with his usual blend of rhetorical essence and beautiful speech. He said, “Everything involving this project from beginning till now looks like a dream. When RJ Balaji approached me for the film, I wasn’t sure if it work out well. But when I went to theatre for the early morning show on first day, I was feeling as though reborn. I couldn’t control my tears and it was such a joyful moment. It wasn’t just about the team giving me an opportunity to work in this film, but everyone were so much humble and down to earth. It wasn’t just about shooting, but I enjoyed so much relishing the delicious food. LKG has now escalated my height and I thank RJ Balaji who is my 11th child as I already have 10 children.” He recreated the dialogue in the movie by saying referring the quote of Winston Churchill from the movie and the auditorium got spangled with applause.

Actress Priya Anand said, “I am so much blessed to be a part of this film as I was part of some big projects in Telugu, Kannada and Malayalam movies. I thank producer Isari K Ganesh sir and RJ Balaji sir for giving me such a good opportunity to be a part of this movie. I request PRABHU sir to start his next project at the earliest and his talent was very much evident throughout the shooting. RJ Balaji’s writing is really intellectual and his passion for such good contents will definitely take him to greater places.”

Director KR PRABHU said, “I thank the audience, Press and media for making this film successful. Usually, I am a man of few words, but I must thank everyone in the team. I thank producer Isari K Ganesh sir for believing in me and giving an opportunity to make my dreams come true. Next one is RJ Balaji who was so much supportive and then it was everyone else in the team. Ram Kumar sir has been such a good support to film and his prideful walk meant a lot to us in the movie. Mayilsamy, Priya Anand and almost everyone, especially the newcomer Nanjil Sampath sir have been pillars of the movie. Cinematographer, Editor and Music Director Leon James are the major backbones contributing to the film’s success. I am really in awe of Sakthi Film Factory B Sakthivelan sir for having belief in our project and comparing it as Tughlaq of Cho Ramasamy sir, which the audiences have been strongly reaffirming.”

Sakthi Film Factory B Sakthivelan said, “LKG isn’t a film that is made for commercial success as we all know about the stature or Isari K Ganesh sir. I am in awe of his great gesture of believing in the film and making it materialise.” Out of love, he honoured everyone with garlands as token of appreciation to entire team.
He continued to speak saying, “There are lots of good things about the film and I can keep talking about it for hours. A film’s success is actually declared only when everyone from cycle stand to canteen and ticket counter witnessed a good collection. Soon after watching ur film a week before theatrical release, I hugged and lifted RJ Balaji as he identified himself as the mass individuals and understood their pulse.

Producer Ishari K Ganesh said, “To be frank, I had never expected the film would scale so much success surpassing our expectations. All praise goes to Press and Media for being so much contributing towards it. I am so happy that the film has set to be an example and inspiration that will influence people before the forthcoming elections. We had actually strived a lot to release the movie at this particular time. I am so glad that family audiences are thronging up in theatres for this movie. If the film is a success, it’s all due to RJ Balaji and my close friend for 30 years – KR PRABHU. Among all the 5 movies that I am producing, LKG happens to be the only movie, where I happened to talk to both actor and director. RJ Balaji would call me everyday and discuss even the petty things with me. JK Ritesh has been so much helpful from bringing his own costumes and even junior artistes (Jokingly) and I would like to cast him in my future projects as well. Ram Kumar sir has kept rejecting many offers after I, but he instantly felt something intriguing about this project and immediately gave a nod. From Nanjil Sampath sir to Mayilsamy, everyone had been so much supportive. RJ Balaji was so much conscious and he made sure that nothing should become larger than life. I request him that many hero offers would come, but he must take into account of the current situation of many comedians who wanted to do same. I request him to take up content driven roles. The success of this film isn’t about box office collections, but the dedication and commitment of director is completing the film on promised time or else it would be a failure even with big collections in box office. In this aspect, KR PRABHU and his entire team had been so much dedicated. Hats off to distributor Sakthivelan sir for being a genuine person and I have never come across a distributor like him, who is so honest, I would like to make a strong announcement that all my forthcoming projects will be definitely given to him.”

Actor RJ Balaji said, “When everyone around me weren’t encouraging me on my dreams, it was Isari K Ganesh who believed in me and made it happen. He has been someone who has been so much helpful for years. Throughout the film, he never asked me a single question about my views and demands. Actors are the greatest blessings in this film as none of them merely performed but breathed more life into their roles. Although, there have been lots of creative differences, KR PRABHU sir was so much honest and we did our best as it was a life time opportunity for us. Starting from JK Rithesh sir, everyone was so much kind hearted. I am so much happy to hear a legend like Ram Kumar sir ask me if I could do a film for Sivaji Productions. My father Nanjil Sampath sir has been a real pleasure to work with. Priya Anand has done a lot of help to me for not all leading heroines will share the screen space with a comedian like me. The technical team has been a real blessing to me as everyone made their best attempts to nurture the project efficiently and we completed the film in just 37 days. Many called us and appreciated and one
among them was Cinematographer Ravi Varman sir appreciating our work.” RJ Balaji and Friends has been the brand that has been mentioned for film’s concept and script. RJ Balaji honoured everyone by inviting them and bringing them under spotlights.

As a token of expressing his thanks to film’s success, RJ Balaji said that a portion of his share along with Isari K Ganesh sir will be used to adopt 10 Government schools and give a complete rehabilitations in making it as an educational hub like a private school.