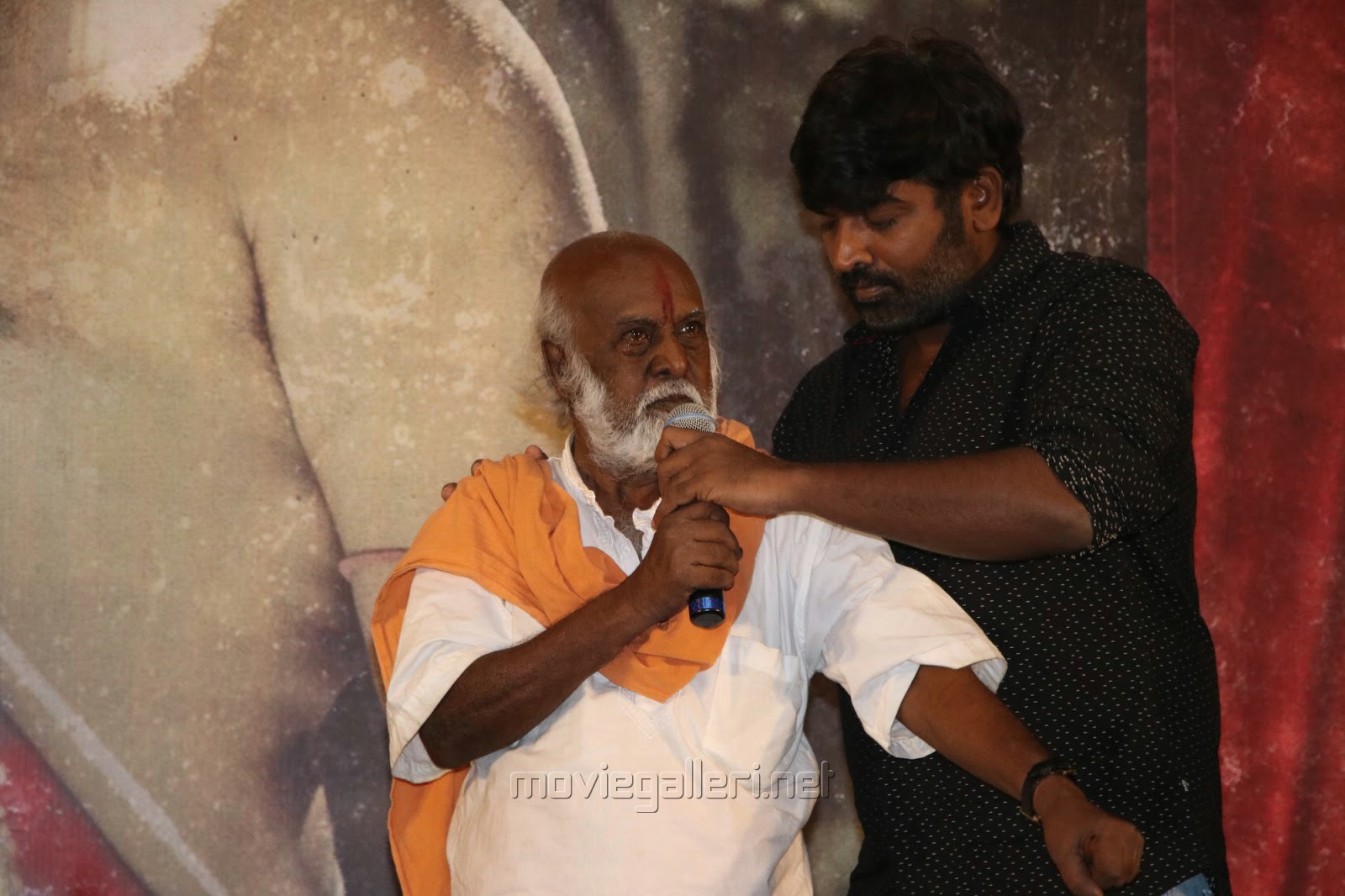 Being ennobled as the most expected release of this season, the entire cast and crew of Vijay Sethupathi starrer “Seethakaathi” were present.

Balaji Tharaneetharan said, “Every drama artist who came for the auditions were tremendous, but we could choose only 17 artistes as the script demanded only them. More than auditioning and working with them, it was a huge learning experience to me.”

While speaking about Balaji Tharaneetharan said, “Initially, I didn’t have Vijay Sethupathi in mind. But after years, when I wanted to approach him again, I was little doubtful whether he would accept the offer. But he immediately accepted and this project was possible only because of him. In fact, it wasn’t just about his acting, but he gave lots of inputs that have worked out good results. Another person who has given excellent effort is music director Govind Vasantha, who had composed music for my unreleased movie Oru Pakkathu k
and am happy that his fame got huge with 96. He has given a soulful work for Seethakaathi.”

Vijay Sethupathi said, “After wearing the makeover of Ayya, I had imagined a lot on how to perceive the role. But I needed someone for a perfect inspiration and it was Ooty Mani Anna who helped me. I am requesting everyone to audition theatre artistes like him as we are lacking proficient performers.” 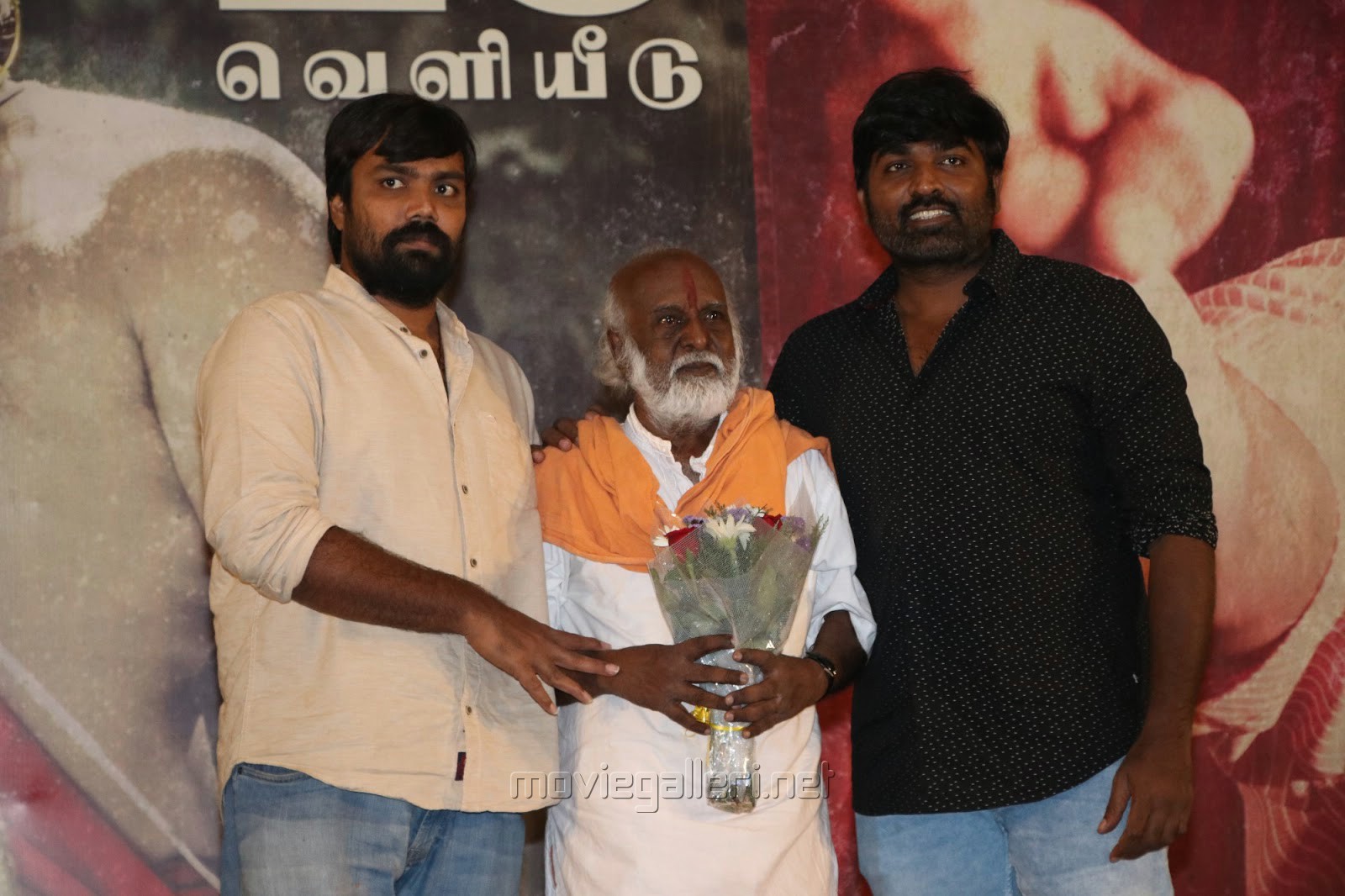 Later speaking about the film working experience, he said, “This is my 25th film and it was something out of dream. I never imagined Seethakaathi will be my 25th film. It’s because of Producers at Passion Studios, this film was possible. Anything in the world cannot be pushed by an individual, but universe helps it and am so emotionally happy that everyone has been a part of my journey.”

Producer Jayaraman said, “There are lots of surprises in the film. Expect the unexpected is what I would say about the film.”

Music Director Govind Vasantha said, “Balaji Tharaneetharan is like a mentor and God Father to me. Working in Seethakathi is a soulful experience. It will not be preachy anywhere. I feel that I have given my best till the date. I would request all to watch the film in theatres for a good experience.”

Actress Remya Nambeesan said, “Being my close friend, music director Govind Vasantha told me that the film has come out really well. I am as curious as everyone to watch the film. Of course, with such a promising team, one can be sure how well the film would be.”

Actor Rajkumar said, “After NKPK, this will be a special film to me. I was really thrilled to see the drama artists recite dialogues during script reading session. Then it was Balaji Tharaneetharan who encouraged me. Every shot in the film would be like an examination. I am thankful to everyone in the team for being supportive.”

Director Deekay who has done a cameo in this film said, “When Balaji Tharaneetharan called me for a screen test, I had fear in me. But he had been so much supportive. I have learnt a lot from him, especially for his making style. Thank you for shaping me as actor and (Jokingly) I will be a competition to Vijay Sethupathi from next film.”

GM Kumar said, “I don’t have scenes with Vijay Sethupathi in Seethakaathi, but I had lots of experience working with him in Kadhalum Kadandhu Pogum. In his film, I have essayed the role of a lawyer. I think it has come out well.”

Actor Vetri Mani said, “There are lots of interesting moments in the film and hope everyone loves it.”

Cinematographer Saraskanth TK said, “I would have not got a better launch than this. Such a nice team to work with. Thought it might sound cliche, I must add that we were like family. When the movie started, Balaji told me that let us not exaggerate too much with colors for it must look natural.”

Art Director Vinoth Rajkumar, “I didn’t have confidence when Balaji Tharaneetharan sir kept insisting me to work in his NKPK and OPK. But again, he invited me to work again in Seethakathi. He has beautifully presented the film. Vijay Sethupathi Brother will be seen as a legend in this movie.”

Editor Govindaraj said, “Seethakathi is a tough subject and it has been nicely conveyed by Balaji Tharaneetharan. I am so much surprised that what was written as script has been exactly made as movie. There isn’t even a single deleted scene.”