The audio launch of Vijay’s Sarkar was celebrated as a festival by the actor’s fans. Creating more joy to the fans was the way in which Vijay spoke in the event.

The fans were awestruck by his positive attitude. The auditorium errupted when he said,’If I become the Chief Minister, then I will not be acting as CM.’

He also made a few political related statements which came as a huge surprise and happy news for the fans who are eagerly waiting for the political entry of their favourite star.

As far as the album is concerned Oru Viral Puratchi and Simtaangaran are favourites among the fans already. The song CEO in the house has now gathered the attention from the album.

Directed by A R Murugadoss, the movie has Keerthy Suresh playing the female lead. The film is bankrolled by Sun Pictures. 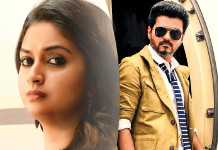