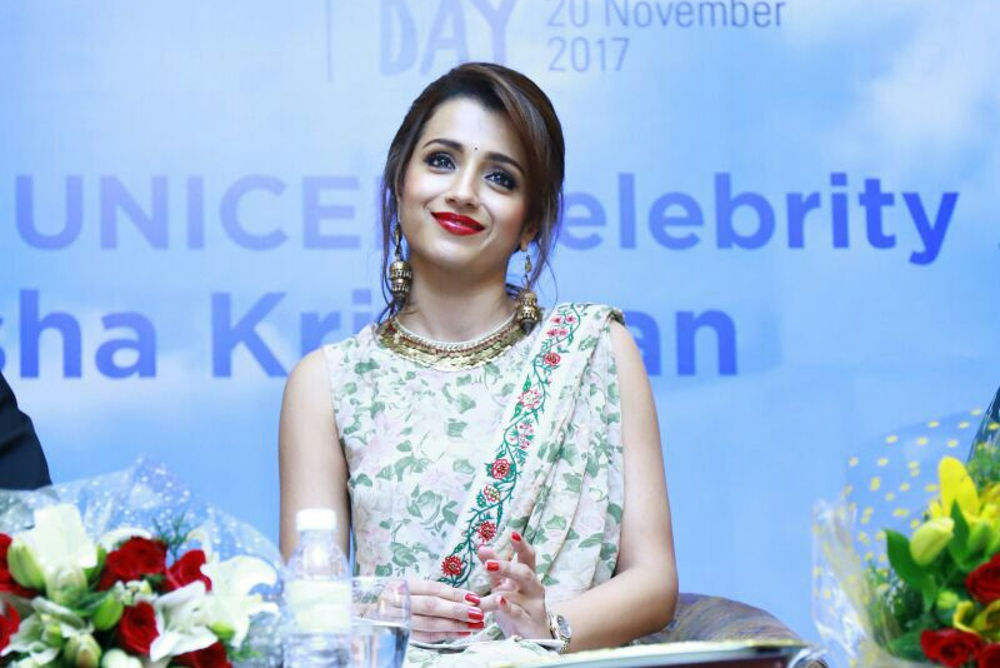 Announcing this at a special function to mark the World Children’s Day, Mr. Job Zachariah, Chief of UNICEF office Tamil Nadu & Kerala said, “Trisha is an icon for the adolescents and the young people. She has the power to amplify the children’s issues and address the violation of child rights in the family, community and in public spaces. She will also promote education and health of adolescents and the value of girl child in family and society.”

Trisha is the first film actress from South India to receive the recognition by UNICEF.

Speaking at the occasion, Trisha said, “I feel honoured with this recognition. I commit myself to create more awareness on health, education, nutrition and protection of children, especially the adolescents and young people in Tamil Nadu and Kerala. I would support the efforts of government to make Tamil nadu malnutrition-free and open defecation free.”

Trisha has acted in 64 films including 38 in Tamil, 23 in Telugu and one each in Hindi, Kannada and Malayalam. She has 43 lakh followers in the twitter.

Trisha won the South Film fare best actress award four times. As a new comer, she won the International Tamil Film award and went on to win film awards for acting from Zee, Ritz, Cine-Maa, JFW, Stardust, and Behind woods, apart from state awards. Notable among this is the Tamil Nadu State Special Jury Award for Best Actress for Abhiyum Naanum.

Education of girls is a magic solution- Trisha

Trisha interacted with over 50 children who were present at the function. During her interaction with them, she stressed on girls education, a magic bullet to eliminate social evils like child marriage and child labour. “If all the girls attend school up to 18 years, we can eliminate child marriage and child labour. In long run, girl’s education will also contribute to reduction of maternal and infant mortality and malnutrition among children”, Trisha added.

The programme was also attended by Ms M.P. Nirmala (Chairperson of Tamil Nadu State Commission for Protection of Child Rights), Sugata Roy ( UNICEF communication specialist) and representatives from child rights organizations and academic institutions, among others.

UNICEF works in some of the world’s toughest places, to reach the world’s most disadvantaged children. Across 190 countries and territories, we work for every child, everywhere, to build a better world for everyone. For more information about UNICEF and its work for children visit www.unicef.org.