Kreshna loses his parents at an early age and is admitted in a orphange by his relative. During his early days, he is involved in violence, but after a certain stage he resorts to non-violence and joins as an intern in an hotel along with his friend Black Paandi.

The hero falls in love at first sight with Anandhi and wants to see her again. In the meantime, Saravanan who is a gambling addict loses his properties to Madhusudhanan following which his wife also leaves him.

He tries hard to regain the lost properties and accidentally sees Kreshna beating someone to a pulp. He then approaches Kreshna to take part in a street fight. Though initially the hero refuses, he later agrees due to his financial needs.

Kreshna wins in all the smaller matches to get in to the big league. However when Saravanan tells him to lose to Madhusudhanan’s guy Kreshna wins it. This once again makes Saravanan to lose everything.

Meanwhile, Nithin Sathya, a member of the Madhusudhanan gang reveals how his boss used tricks to win the bets. Following this Saravanan’s team plan a heist to get back what they feel is rightfully theirs.

Did they succeed in their planning, what happened to Kreshna and Anandhi’s love forms the rest of the stoy.

Kreshna who has been choosing different scripts has nailed his character in this one. He has emerged as an action hero in this flick and shown anger just with his expressions. He also excels in the love scenes with Anandhi.

Anandhi has very little to do in the flick and comes just as the love interest of the hero.

Saravanan has got a meaty role after Paruthiveeran and comes throughout the movie. He has carried his character beautifully.

R H Vikraman’s BGM is one of the biggest strengths of the movie and elevates the action sequences especially. A special mention has to be made about Arvi’s cinematography and Anbariv’s stunt choreography.

Debut director Feroz has done some breathtaking detailing for this film which is one of the biggest strengths. He has chosen a different script and has delivered it with near perfection. His strength lies in the way in which he has got the work done from his cast. 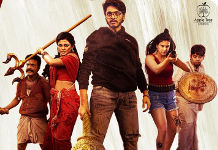