Now the director has revealed that he will soon be making a film with Nayanthara as the main lead.

In a recent interview Raja said that the story for the flick is also ready.

He also praised the way she understands the character she plays and how hard she works to do it to perfection.

It may be noted that Nayanthara played the female lead in the director’s hit flick Thani Oruvan and is also the leading lady of Velaikaran.

Giving an insight of the actress’s role in Velaikaran, Raja said that she plays the role of Mrunalini and comes along with the hero throughout the movie. 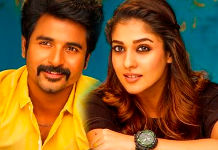