Tuck Jagadish starring Nani is one of the most awaited films for various reasons. The successful combination of Nani and Shiva Nirvana is back with the film which is carrying exceptional buzz with songs becoming chartbusters and teaser and most recently trailer winning the appreciation of all.

Today, the team has released Tuck song from the film composed by Gopi Sundar. The music director came up with an intense number. Interestingly, the song is sung by Shiva Nirvana himself and his vovals are very energetic, much aptly to the genre of the song. Nani appears in mass and action avatar.

Billed to be a wholesome family entertainer with adequate commercial elements, Tuck Jagadish will premiere on the streaming platform Amazon Prime Video from Vinayaka Chavithi on September 10th.

Ritu Varma is the leading lady and Aishwarya Rajesh will be seen in a crucial role. Jagapathi Babu has played Nani’s brother in the movie. 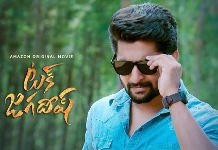