While rumours were rife that Ajith’s upcoming flick Vivegam has got a ‘U’ certificate, the director of the movie, Siva has announced that the movie has got a U/A certificate.

Sources revealed that ‘U’ certificate was not given as the movie had some breathtaking stunt sequences.

This has come as a joyous news to the Thala fans who are waiting to see their hero in an all action avatar.

However the fans were also disappointed that the movie will be releasing on 24 August instead of the earlier speculated Independence Day weekend.

Now that that the film has been censored, it can be rest assured that the flick will be releasing on 24 August.

The flick has has Kajal Aggarwal as the female lead while Akshara Haasan plays a pivotal role. Anirudh Ravichander has rendered music for Vivegam. 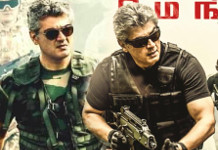