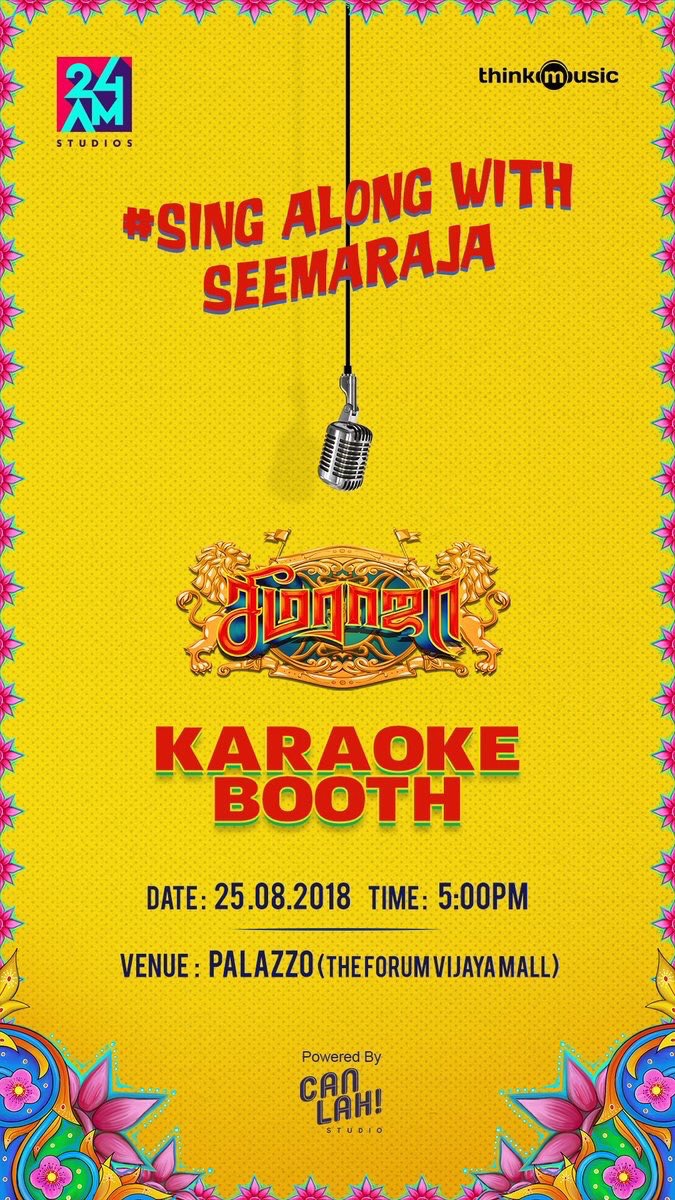 For many following the trend is a pattern , for very few setting the trend is a pattern as well as passion. The leader of this exclusive pack is RD Raja of 24 AM STUDIOS.If the films he make always better his previous in the box office and gain a large visibility, His amazing marketing skills are constantly bettered by himself with his marketing strategies, which are very novel. The film industry and the audience are in for an other pleasant surprise with his next act of promotion.

“Seemaraja” produced by R D Raja for 24 AM STUDIOS starring Sivakarthikeyan, Samantha, Soori, Napoleon,Lal, Simran and many other prominent names, music composed by D.Imman, and directed by Ponram is all set ready for a release on September 13th (Vinayaka Chathurthi), and the team is geared up for the release in a big way. For Seemaraja special Karaoke Booths are being set up in various screens across the state. The booths will have the lyric videos,music tracks, and the trailer of the movie.The visitors who come to this booth can involve themselves into the karaoke by singing and dubsmash.Their acts will be uploaded in our you tube platform.The best of this pick will be honoured with greet and meet opportunity with D.Imman.

“We have named it “Sing along with Seemaraja”. The promotions cannot be just thrown on every body in random.Now a days the promotions are also suppose to be personal.The involvement of the audience is a must i feel and the first step towards it is this concept of “Karaoke Booth”. As far as my knowledge is concerned it is the first of it’s kind in South India. The visitors to this booth can sing and the same will be recorded instantly and up loaded in our you tube platform. We have separate booths for the kids and adults . The kids booth will be called as “SeemaRaja mini karaoke booth”.Apart from the music track, the teaser will also be available.The visitors can also do Dubsmash. These acts will be uploaded in our you tube platforms .The best ten of these acts will be have an opportunity to meet and greet with our music director D.Imaan.To begin with we are launching this campaign at Palazzo in Forum Mall, Vadapalani today evening at 5 p.m in the presence of the D.Imaan, Director Ponram, and lyric writer Yugabharathi.We are confident that the youth and kids who form a major portion in the fans segment of Sivakarthikeyan will utilise this opportunity and create an opportunity for themselves to become a “Karaoke Star”, after all the saying is evergreen “Your voice makes your choice of glory” summed up R D Raja with pride.