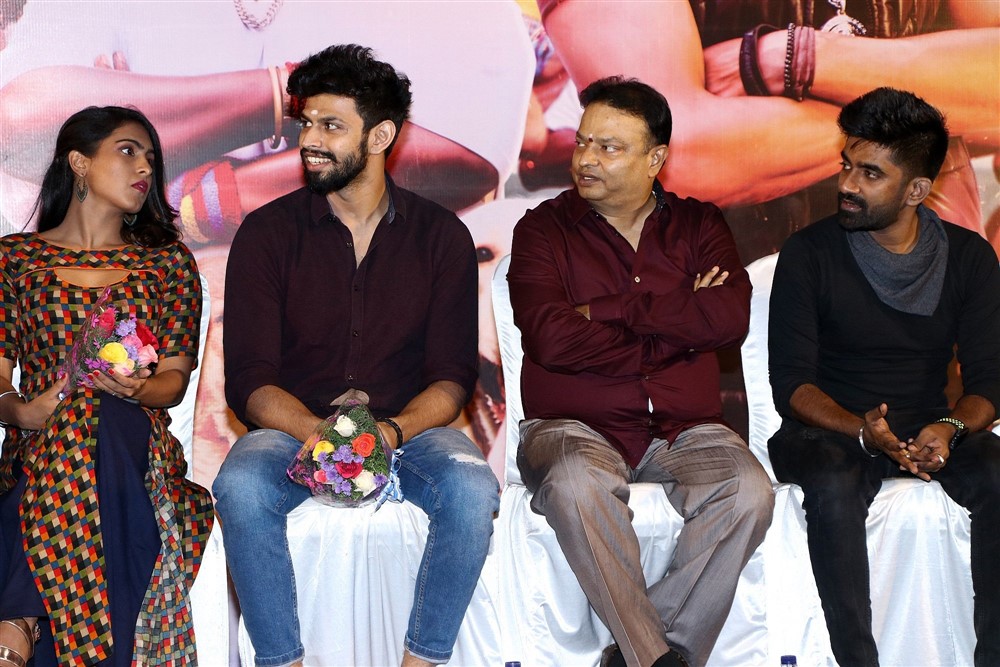 Following the grand success of ‘LKG’ and ‘Comali’, Producer Dr. Ishari K Ganesh is gearing up with the release of his next release “Puppy” scheduled for October 11, 2019 release. Directed by debut filmmaker Morattu Single, the film has Varun and Samyuktha Hegde in lead roles with Yogi Babu, Marimuthu, Thangadurai and few more prominent actors being a part of this star-cast. The film has musical score by Dharan and cinematography handled by Deepak Kumar Pathy. The entire team was present for interacting with the press and media this evening and here are some of the excerpts from the event.

Actor Varun said, “I had lots of responsibilities when taking up Puppy as it marks my debut as an actor in lead role. More than myself becoming a successful actor with this film, I strongly believe that it will be a hat-trick success of my uncle Ishari K Ganesh’s Vels Film International for he has been producing unique movies. Working with the director was a huge experience. His clarity and determination towards getting what he visualized is extraordinary. I and Samyuktha had some intimate scenes, which left both of us in laughter most of the times. Having been great friends, we would burst into laughter and the director himself gets tensed at times. I thank music director Dharan for giving such a wonderful album. I am sure; this will be the best in his career after Poda Podi. When he got onboard for this film, he promised that he will treat this film as his debut film and will give the best, which he has done now. Deepak Kumar sir depicted us visually in a beautiful manner. There are two heroes and heroines in this movie. Yogi Babu and I are the heroes while Samyuktha and Puppy (A female Labrador) will be another one.”

Actress Samyuktha said, “This is really a greater opportunity for me. I must thank Ishari sir for banking his hopes on a newcomer like me. It was only halfway through this film; I was included in the project ‘Comali’. I and Varun have been sharing a wonderful friendship. The songs have been wonderfully composed by Dharan. I thank Deepak sir for showing us beautifully.”

Producer Ishari K Ganesh said, “We at Vels Film International have been making movies based on different genres. It was very much evident with LKG and Comali. We have made “Puppy” for the sake of teenage audiences. The film’s director narrated me the story and I had more confidence on him that he will definitely translate what he wrote as script into a perfect visual output. I am happy to see Varun that he has exceeded my expectations as an actor. Samyuktha has done a good job.”

Music director Dharan said, “The entire team is like a bunch of friends for me. When we started working on this film, it was like motivating each other through best efforts. I am thankful to Gautham Vasudev Menon sir for crooning a song in this album. He has been the major reason for what I am here today as a music director. I thank my brothers Yuvan Shankar Raja and Anirudh for supporting and guiding me at many point of my life. I am happy that they have extended their support for this film rendering their vocals. I thank RJ Balaji for becoming a playback singer for my score. I am sure that everyone will be enjoying this film.”

Director Morattu Single delivered an emotional speech, where he compared himself as a mother, who is about to give birth to a baby (Puppy movie) and referred each and everyone in the team as mother, father, brothers. He thanked his parents, friends and mentor-National award winning filmmaker Manikandan. He totted up saying that the film will be a good family entertainer, that each and every parent can watch it along with their children. There is no vulgarity in the movie and it depicts nothing short of reality.