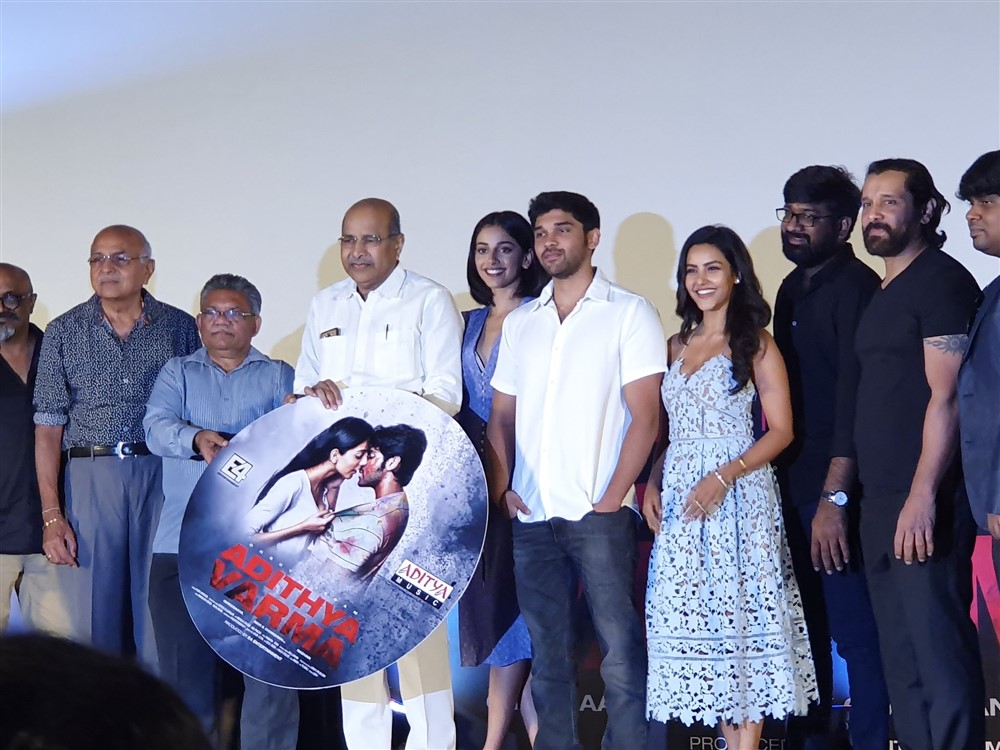 The audio of actor Dhruv Vikram’s much awaited romantic action drama Adithya Varma was launched amidst much fanfare at the Sathyam Cinemas today.

The film, which is the Tamil remake of the Telugu blockbuster Arjun Reddy, marks the acting debut of Dhruv Vikram, the son of one of Tamil industry’s most dearly loved heroes, Chiyaan Vikram. Directed by Gireesaya, the film also features Banita, Priya Anand and Anbu Dasan among others.

A host of celebrities attended the audio launch as did the cast and the crew of the film.

Speaking at the audio launch, the producer of the film, Mukesh Mehta said, “Vikram never behaved like a star during the making of Adithya Varma. He was only present as Dhruv’s father. You will get to see Dhruv and Chiyaan Vikram act together in a film in 2021 and you can rest assured that it will be a big hit.”

One of India’s top cinematographers, Ravi K Chandran, who is the cinematographer of the film said, “My son has done the cinematography of this film in Hindi and I have done it for the Tamil version. That by itself is a challenge and that comes from within the family.” The cinematographer was all praise for the unit and in particular, for Dhruv, who he said had done a fantastic job in this challenging role.

Gireesaaya, who is making his debut as a director through Adithya Varma, said, “I have worked as an assistant director to many directors but I have got my first break in Tamil.” Expressing his gratitude to the Tamil film industry and to the langugage, the director said he needed to thank actor Vikram and producer Mehta immensely for the opportunity. Talking about his hero Dhruv. Gireesaaya said, “Dhruv is ultimate. His commitment and dedication are extraordinary. After all, he is like his father. Like father, like son.”

The director said he needed to apologize to Dhruv for having gone for two or three takes while shooting some scenes. “I am apologising because although I have sometimes gone for two or three takes, I have always used only the first take. Dhruv’s first take has always been brilliant. I Love you Dhruv!,” the director said. He also had words of praise for both actress Priya Anand and heroine Banita, who he said had done a brilliant job.

Speaking at the audio launch, music director Radhan clarified that he was a proper Tamilian. “As my name is different, people think I am a Telugu boy.”

A visibly moved Redhan said that the reason he was on the stage today was because of actor Vikram. ” Nobody can beat Vikram sir when it comes to respecting and encouraging technicians. One night, my sound recordist and I were working late. Suddenly, a soft voice from behind said,’Want a cup of coffee?’ He made it for us,” said the young music director, who expressed his gratitude to the actor for having given him the opportunity and for encouraging him. He also thanked his sound recordist Mujeeb Rahman, Sandy, Harsha, all his singers and lyricists.

Actress Priya Anand, who spoke on the occasion, thanked producer Mukesh for having launched her in Malayalam through Ezra.
“When I worked with Sridevi ma’am in English Vinglish, I found her to be a wonderful mom. Similarly, while working in Adithya Varma, I found Vikram sir to be a wonderful and caring dad,” the actress said and added that the relationship between actor Vikram and his son Dhruv was special. She pointed out that Dhruv was fun to work with and that Adithya Varma will be very fresh and engaging.

The heroine of the film, Banita, began her speech by thanking the Assistant directors team, which she termed “incredible”. She also thanked her director Gireesaaya for pushing all the actors and for doing such a wonderful job. Banita too expressed her gratitude to actor Vikram for his immense support during the making of the film. Stating that she was inspired by actor Vikram, the actress said, “I am so indebted to you Vikram sir. Thank you for working so tirelessly everyday to make me and Dhruv look good.” Speaking about her co-star Dhruv, Banita said, ” I am so proud of you Dhruv. I am so honoured to be at the start of an incredible journey with you.”

The highlight of the audio launch was actor Dhruv Vikram’s speech. The young actor, began his speech saying, “I have been to several schools and colleges to deliver speeches but that was easy. However, today is different because my family is here.”

Expressing gratitude to his family members for their immense support, he said, “It is because of my family that I am here today. If it were not for their support and motivation, I wouldn’t be here.”

The actor also disclosed that there was a team that had been consistently and dedicatedly working on this film for two years and thanked them. The dashing actor thanked his producer Mukesh Mehta for backing him and his music director Radhan for making him sing a song.

Talking about director Gireesaaya and co-director Shaurya, Dhruv said that he knew that the film was in the best hands right from the start.

The young actor next spoke about his dad, actor Vikram.

“I have no words for Appa. His dedication for this film was 100 per cent. I know that my dad is a good actor but more than that he is a great father. I am nothing without him. What you see in me is basically another facet of his.” Thanking his fans for all their love, the actor said that he was nothing without them.

Dhruv said that he was here because of his mom and dad. “I wished to honour my dad and that is why I am here on this stage,” he said.

Joining his son on stage, an immensely happy actor Vikram laughingly said, “I don’t know to talk like Dhruv.”

The actor confessed that he had never felt tension, even while awaiting his 12th standard results or waiting for Sethu’s release. “However, today I am tense. Not just today but for some time now, I am tense,” Vikram said, giving an indication of how much he loved and cared for his son.

“You can launch Dhruv however you want but you need an important story,” Vikram said and thanked producer Mukesh Mehta for picking Dhruv and for having faith in him. “Mukesh Mehta sir had bought the rights of the film because he saw the powerful story in it. He saw a dubsmash of Dhruv and approached me to get Dhruv to play this role. This was a wonderful launch pad.”

Vikram said that they had done Adithya Varma with a vision and a lot of love and it was a wonderful experience.

Complementing director Gireesaaya and co-director Shaurya, Vikram said, “They were particular that the authenticity of the film was ensured. They were very clear about what they wanted. Both Shaurya and Giri are like twins. Without Giri or Shaurya, this film couldn’t have been possible. I am also like an assistant director in this film.”

Actor Vikram also thanked cinematographer Ravi K Chandran and recalled that they used to share a room at one point in time. “Today, he is one of India’s best DOPs. We are here because of our dream. That is what I told Dhruv as well. Follow your dreams.”

The actor also thanked heroines Banita and Priya. Thanking his fans for all their love, actor Vikram said, “The only legacy that I am giving to my son is you my fans. You feel the same that my friends and famiily feel for Dhruv. That love comes automatically.”

Vikram said Dhruv could recall and deliver any dialogue from his film and that he would do entire scenes. He also got Dhruv to deliver some lines from a scene in the film, much to the delight of the scores of fans who were present on the occasion.