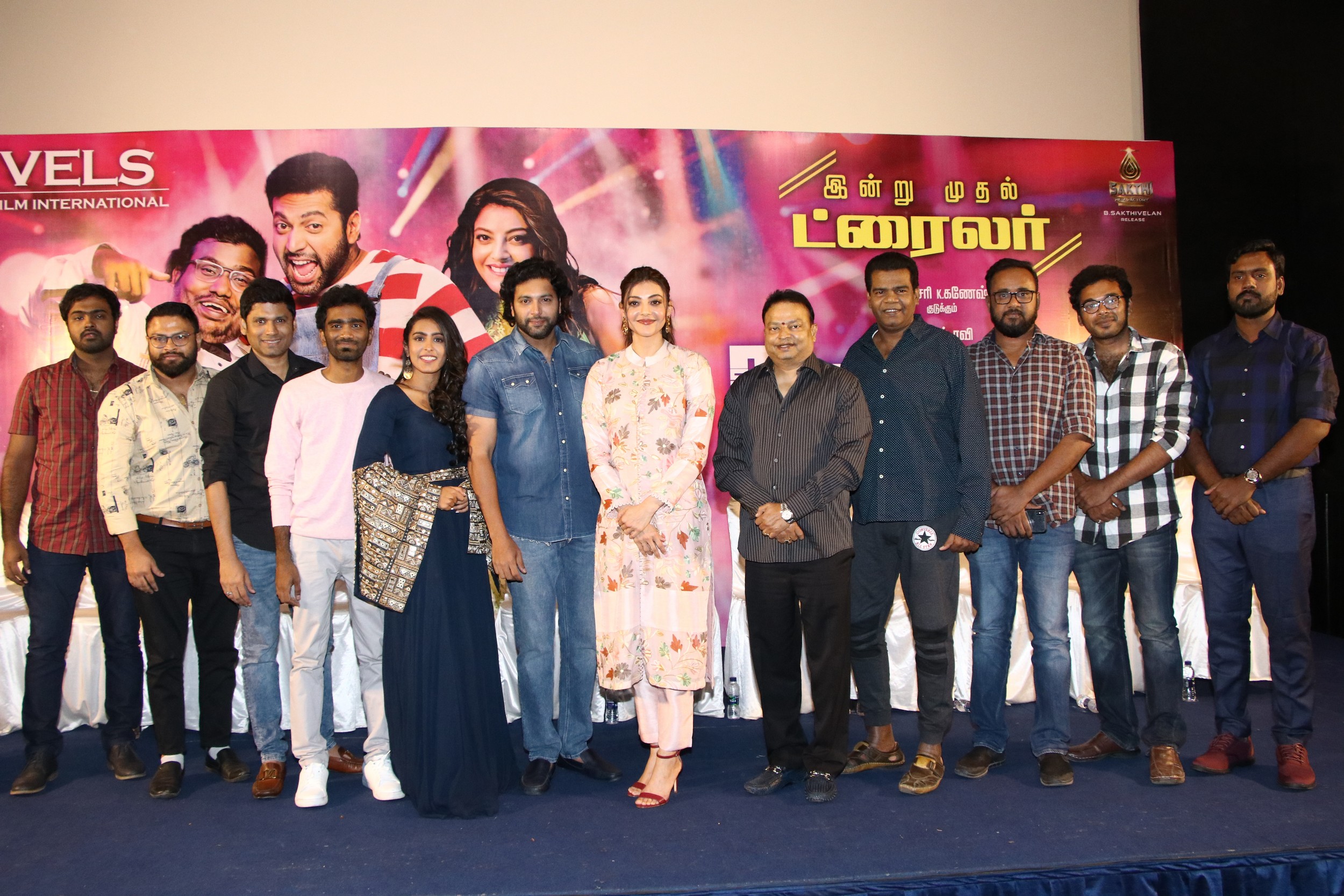 The entire Audi was overwhelming with fun and amusement with the trailer and songs of Jayam Ravi-Kajal Aggarwal starrer “Comali”. It was not just about the colorful visuals, but the film’s theme about the transformation that our society has undergone through 90s and 20s s is very well registered. The entire team of Comali – Jayam Ravi, Kajal Aggarwal, Samyuktha Hegde, producer Ishari K Ganesh, director Pradeep Ranganathan and many others from cast and crew were present for the press meet. Here are some of the excerpts from the occasion.

Actor Jayam Ravi said, “This is a very happy evening for all of us here as the stage here is offering me lots of positivity. Comali has been a beautiful learning experience for all of us. The reason why I chose this film was that I felt it as an essential need of hour. I had mentioned the same for Adanga Maru and you all understood it properly after watching the film. It will be same with Comali. I am thankful to Dr. Ishari K Ganesh sir, who is like a father figure to me. He is so humble and has a childlike heart, but when it comes to hard work, he remains unbeatable, which I have witnessed by myself. Producing so many films at the same isn’t an easy task and he is really exceptional. My only desire and dream is to see Vels Film International becomes an emblematic AVM Productions. I am eagerly to work in many projects with him. This is the right time to make a film as it cannot be materialized after 10 years. For the ones, who have come across 90s and 20s, it’s okay, but things aren’t going to be the same after a decade as the transformation is going to be mammoth. If anyone had told before 20 years that water will be sold in bottles, it would have been seen as a joke, but today it’s a reality. Humanity is the main subject that we see in Comali. We all become united only when there is crisis. Pradeep Ranganathan is an obsessed filmmaker, who doesn’t want to compromise with anything. He has achieved a bigger status at this age and he will continue to streak more success. He is like a brother to me, but I always treat him like my son. Kajal Aggarwal is such a talented and experienced actress, who doesn’t take any appreciations to my mind, but just showcases dedication all the time. Samyuktha Hegde is a lady Prabhu Deva and she is such a great person. Shah Ra has done a remarkable job and I would envy what if I done this role in double act. I am sure Comali will entertain everyone and at the same time give something to think and take back home.”

Actress Kajal Aggarwal said, “Thank you Dr.Ishari K Ganesh sir for being so much supportive throughout the shoot. Pradeep is such a great filmmaker and I felt really happy to work with him for he owns such a talent. Samyuktha is such a wonderful girl. Honestly, the output has come out very well. This is the first time I am working with Jayam Ravi. He is one of the most professional and humblest person, I have worked with.”

Producer Dr.Ishari K Ganesh said, “First and foremost, I would like to thank Sakthivelan sir for making LKG a good hit. I am so thankful to him and expect the same results with Comali. When the project started materializing, it was a smaller one, but gradually turned into a bigger one. Finally, after watching the rough cut, I was so much confident that it will turn to be an amazing film. Pradeep is just 26 yrs old and he wrote the script of Comali when he was 23 yrs old. When he came to narrate the script, I didn’t want to hear it and asked him the choice of heroes he has in mind. His list included Ravi and I immediately called him for the script narration. He instantly asked Pradeep to meet him at his office on same day. It was nearly 3 hours and I didn’t get any calls from Jayam Ravi and thought that it is dropped. However, I was surprised to see his call around 10 p.m. asking when we can go for the shoot. This is a film meant for kids and adults as they can come together as a family to theatres. Very few actors would be ready to mould themselves for the sake of roles they do. Even I suggested Ravi that we can go by graphics to rejuvenate his looks, but he shed 15Kgs in 2 months for the role of a school boy. I have admired Ravi as a family hero as he is the only artiste to draw family audiences. However, he has deviated himself into different zones and am happy that he chose to be a part of this film. We are releasing the film on August 15 and I am sure everyone will like the film. The trailer’s ending has Superstar Rajinikanth’s episode and I asked Pradeep if he is trying to get me into misunderstanding with him, but he convinced me that everyone is waiting for his political entry. Over here, I confirm that I will be making a 3-film deal with Jayam Ravi.”

Director Pradeep Ranganathan said, “I narrated the story of Comali before 3 years soon after the completion of my college. I am so thankful to Ashwin sir and Ishari K Ganesh sir of Vels Film International for helping me narrate the story to Ravi sir. I owe a lot to Ravi sir for instantly believing in my script and giving a nod. The school boy role that Ravi sir is essaying demanded for a weight shed, but I was doubtful whether he would not accept it for it would take at least a year. However, he surprised me by shedding 15Kgs in just two months and after few days, he reduced 5Kgs more. I am sure, the flood sequences and a set song will be a good experience. If not for the support of Ishari K Ganesh sir, this would have not been possible. Yogi Babu sir will make you laugh and even moisten your eyes at times. KS Ravikumar sir being a legendary director and when we wanted someone to can evoke laughter, terror and anger, none other than him came to our mind. Kajal Aggarwal is really great for she accepted to be a part of this film even after telling her that she will appear only in the second half. Samyuktha is yet another attraction to the movie and we are proud to introduce her from Kannada film industry. Hiphop Aadhi has been a mentor to me as he would suggest me many betterments, whenever I go wrong in my decisions. Richard M Nathan sir is a great support to our film.”

Cinematographer Richard M Nathan, “What I loved about the film is that it was completely with youngsters, I would say that this is one of the best teams I have worked so far. The dedication of Jayam Ravi is so immense. Kajal Aggarwal is such a great actress, whose dedication is immense. I am confident that Comali will be a delightful experience for the audiences.”
Samyuktha Hegde said, “I am excited to be a part of this film, which has gem of persons like Jayam Ravi sir. Kajal Aggarwal is a sweet person and we would discuss a lot about travel. Pradeep Ranganathan is such a brilliant person with the exceptional skills and I feel lucky to be a part of this movie.”

Sakthivelan B of Sakthi Film Factory said, “If someone wants to achieve bigger in life, it would happen if they are able to achieve at least 50% of the hard work by Dr.Ishari K Ganesh sir. We collaborated for the first time through LKG, which was a profitable venture and now we are sure that Comali will be a sure-footed winner for it has so many ingredients that will attract the family audiences. Just now, the trailer got released and within few minutes here, I got calls from several producers and distributors appreciating it.”