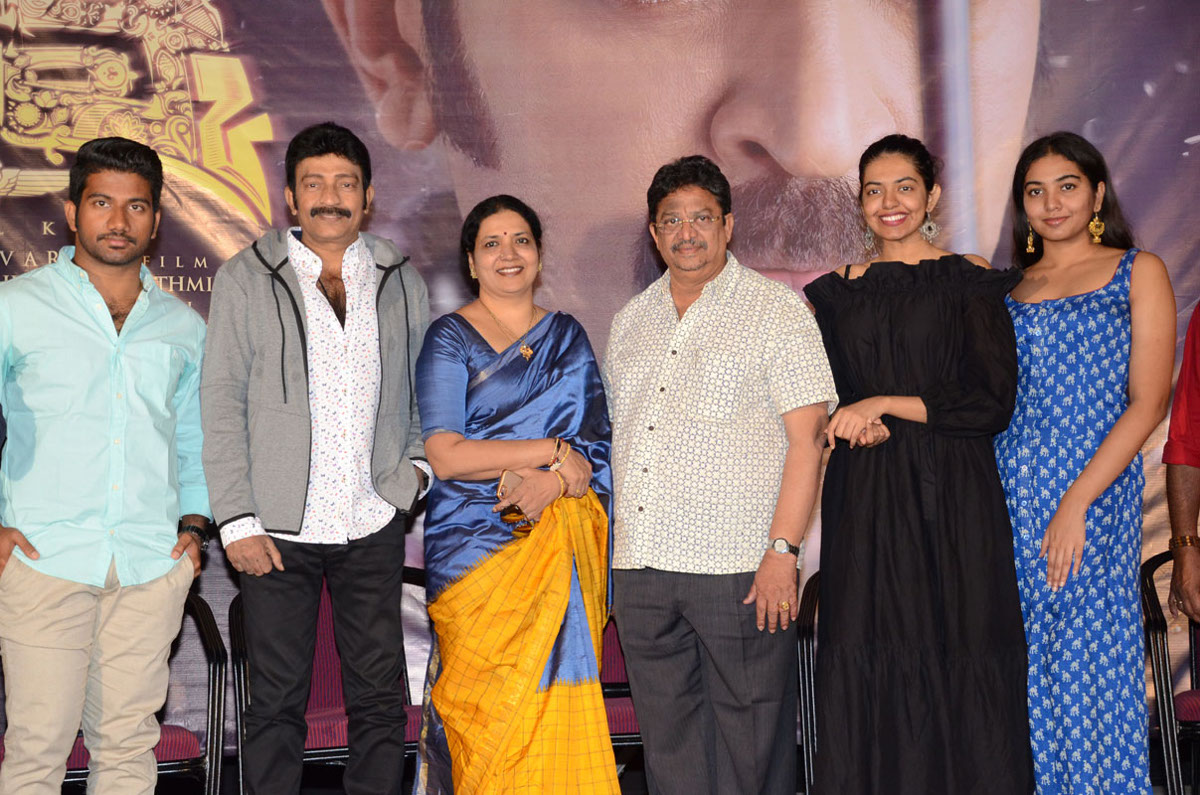 The Teaser for ‘Kalki’, an investigative thriller directed by Prasanth Varma, was released on Sunday at Hyderabad’s Prasad Lab on the eve of Dr. Rajasekhar’s birthday. Besides the hero, who has new tag ‘Angry Star’ going for him, the event saw the presence of producer C Kalyan, the director, Jeevitha Rajasekhar, Shivani and Shivatmika and important crew members.

Speaking on the occasion, C Kalyan said that Rajasekhar is like his family member. “When I had no money to produce a film, many years ago, it was he who bought the remake rights of a Tamil movie and made me a producer. Jeevitha is like my sister and she has always stood by me. The couple helped me in making ‘Gorintaku’. I will always be indebted to them. Coming to ‘Kalki’, I thank a young film aspirant named Karthik for lending us this beautiful title. After Rajasekhar made the superhit ‘PSV Garuda Vega’, this is one more distinct entertainer from him. Set in the 1980s, the film has been ably done by the director. His concept will definitely catch the imagination of the new generation. As a producer, I have given him everything that he needed to make ‘Kalki’. The Art department erected a new kind of set. I hope Prasanth Varma will score a big hit. He should do bigger projects in the future. In ‘Kalki’, you will see Rajasekhar doubling down on on-screen angriness. He and the entire team have worked day in and day out on this movie. We are going to shoot the remaining portions of the movie in Badami, parts of Karnataka and Tamil Nadu. About 70 percent of the shoot is over. The release date will be announced after the production works are over.”

Rajasekhar said, “I didn’t speak about ‘PSV Garuda Vega’ before its release. I want to do the same now also. After the release of my previous film, I waited for 6 months for a script like this to come my way. After zeroing in on the project, we waited for the director’s dates. He mercifully gave the dates eventually. It’s like a big promotion for me to have got to act under Kalyan’s production. He produces a movie only if he loves the content. He is a mini-Dasari Narayana Rao garu who supports the industry. Just as Praveen Sattaru taught me new things during the making of ‘PSV Garuda Vega’, Prasanth Varma is helping me learn new things. There is a very good performer in him. He is clear about what he wants. He rectifies the mistakes of his actors. I always value the work that I get. Jeevitha has put in a lot of effort for this movie. She has gone through so much. On the occasion of my birthday, I just want to say that life is short and we all have to love each other.”

Prasanth Varma said, “I happened to meet with Jeevitha garu even before the release of ‘AWE’. It was a long wait before the project came to fruition. In terms of script-writing, ‘Kalki’ took ten times more effort than what ‘AWE’ took. It’s not a complex film but there is a lot of detailing involved. We rewrote about 70 drafts. ‘Kalki’ is a commercial film that has its own template. It’s going to be a franchise. Hopefully, we will do ‘Kalki-2’ before Rajasekhar garu’s next birthday. The scale is really epic. It has been fantastic working with Rajasekhar garu. Originally, his character in the movie was serious. Once I started interacting with him, I came to know that he is a very jovial person with a great sense of humour. I have infused that trait in the character. So, when you watch him on the screen, you will have a smile on his face. But when he gets angry, it comes like a jolt. His family is so sweet. They have been making me eat so much that I have had a tough time keeping my weight intact. There were days when we shot for 48 hours at a stretch. It’s my idea to come up with ‘Angry Star’ tag for our hero. Not everyone understood my first movie. I am sure ‘Kalki’ is for everyone.”

Jeevitha said, “The big success of ‘PSV Garuda Vega’ helped us bounce back. You can earn any amount of money but nothing can buy you success. I thank Praveen Sattaru for delivering ‘Garuda Vega’. Like they talk about ‘Baahubali’, everyone talks about it. While the film has given us so many good memories, it’s tragic that my mother-in-law and my elder brother died when it was being made. It’s C Kalyan annaya who came forward to bankroll ‘Kalki’. When the subject was ready and I was wondering who will invest a big amount in the project, Kalyan annayya told me not to worry and offered to produce ‘Kalki’. He told me, ‘You have lost money on films. It’s time for you to save for your children. Let me produce this movie’. Prasanth Varma eats, sleeps and breathes cinema. He always strives for betterment. ‘Kalki’ has got amazing technicians on board. Rahul Ramakrishna, for example, has given 40 days of his call sheet because he loved the script so much.”