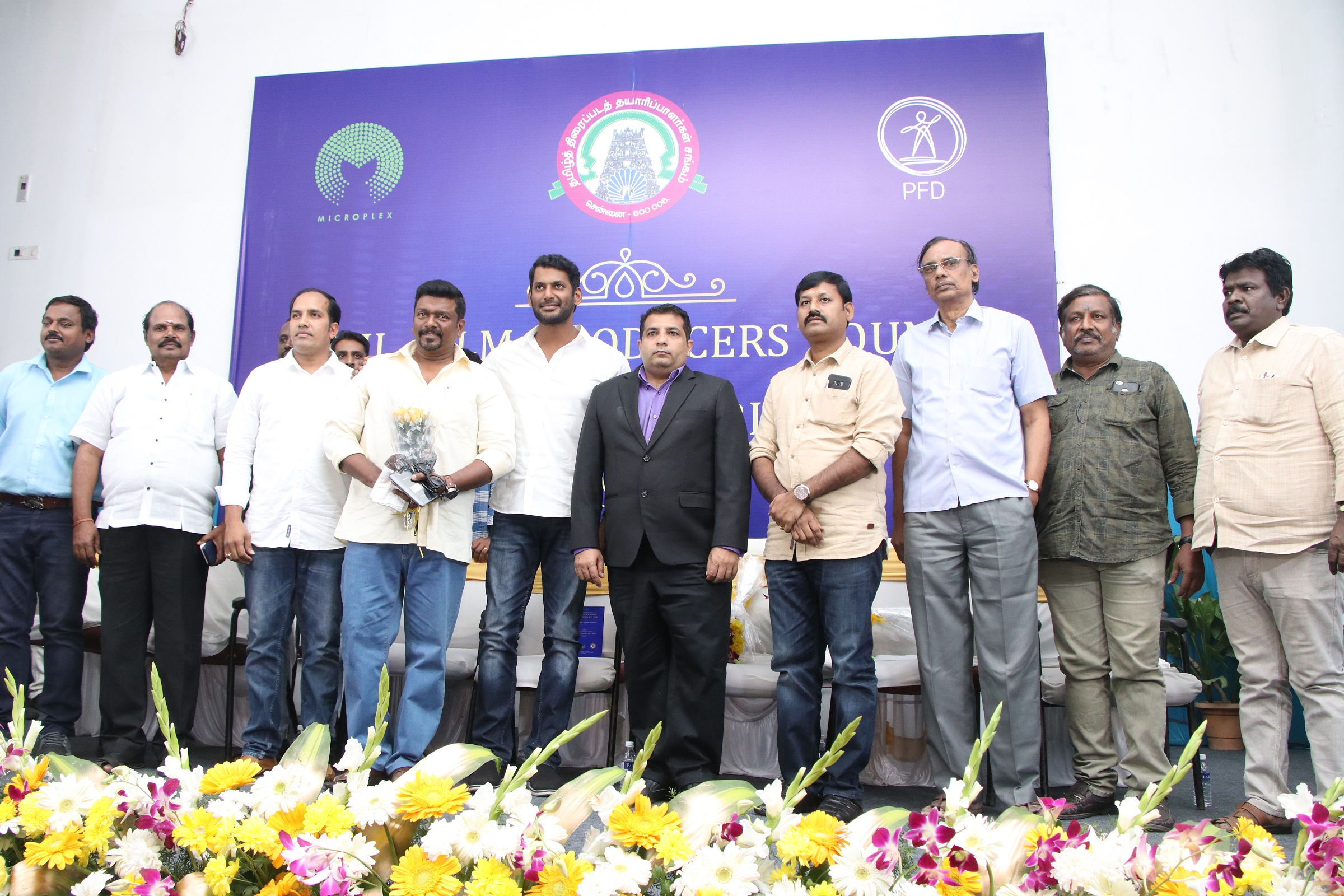 TFPC President actor Vishal said, “On the behalf of TFPC, I would like to extend my heartiest thanks to Mr. Albert of Mircoplex for giving us such a good space. So far, we have come across such work ambience only for IT and corporate offices, but this is the first ever time, an union in film industry is getting such a work space. It all happened before few months, where we were having a casual interaction about the expenses that we had to go through for the couple of TFPC offices. At this point of time, Mr. Albert Selvam, Chairman of Microplex Global Pvt Ltd came forward and gave us the working space here without rent, which is something really phenomenal. The main operations will be continuing from the other TPFC offices and this will be an additional one as well. I welcome Mr. Ranjith of Prime Focus into Tamil film industry. Having carved a niche of excellence through the services provided through Prime Focus, we as producers are so much delighted that this joint venture with them will definitely yield beneficial results. Especially, this is going to be a real big boon for the producers, who had succumbed to unbearable burdens of paying for the projectors, which actually doesn’t belong to them. Now with the association of Prime Focus and Multiplex, Tamil Film Producer Council has a good clarity of proceeding with the promised visions. I am sure, the Visual Projection Fee will be reduced to a greater extent resulting in a major relief to the small time producers. In addition, I am so much thankful to Albert for making the challenging dream of ‘Mastering Unit’ come true. When we had proposed this idea of Mastering Unit, many in the industry had suggested it to be a difficult one. But on the basis of shared contribution and with the great aid of Albert, things have become possible now. There is something really special about this Microplex unit as it has wonderful attributes of Preview Theatre accommodating 50 recliner seats, which can be used by small time producers for censor and special preview
screening.”

In addition, Tamil Film Producers Council President Vishal said that the preparations are going on full swing over the Ilaiyaraaja 75 that is being held on February 2 and 3. I am sure, it is going to be one of the most greatest and memorable events in the pages of Tamil film industry.

TFPC Vice-President R Parthiepan said, “Today Mirco-Plex might look ‘Micro’, but it will eventually get Macro-Plex soon and it’s not just PLEX, but PLUS to the Tamil film industry. Our Vishal’s PRIME FOCUS isn’t about marriage, but he has always been working rigorously in doing the best towards Tamil Film Producers Council in his tenure.
Even now, the discussions that he has been holding with others with Mircoplex and Prime Focus made me wonder, where selfless nature is has been so much tremendous. The time that he is spending along with us over the betterment and progress of Tamil Film Producers Council has been really great.”

Mr. Albert said, “After becoming producer, Vishal brother became so much aware about the issues and challenges faced by Producers. The mastering unit was the long term dream of everyone here. I also felt the same and as a small contribution, I have gifted 5000 sq feet of work space for Tamil Film Producers Council. Vishal Anna is well known for his outspoken and honest nature. Out of the funds raised for Tamil Film Producers Council, he has always maintained the good record of finance and he will definitely present it to everyone. We are now working towards the success of Ilaiyaraaja 75, which is the ultimate dream of us. His musical sedation has been the essence of everyone’s sleep decades and we want to honour him wholeheartedly. He has never given interest towards his personal issues and has always placed the betterment of Tamil film producers at first place. We are privileged to have Prime Focus embarking on their journey into South film industry. This is all due to the honest and sincere nature of Vishal brother. This is definitely going to be the privileging thing for every film producer out here in Tamil industry.”

TFPC Secretary Kathiresan said, “Creating a competitive situation isn’t an easy thing. When we discussed about the mastering unit, it was a huge dream and now with the great support of Prime Focus and Microplex, we as members of Tamil Film Producers Council are so much delighted. It is surely going to land the scenario into brighter phase.”

TFPC Secretary SS Durairaj said, “From the time after opening the office of TFPC in T Nagar, there have been one or the other issues. Everyone in the team has been working rigorously towards the best results and there are some constraints and challenges that we had to go through. At this point of time, Albert sir has brought forth a good relief and for his good hearted nature, we believe everything will happen smoothly from here. The Mumbai based Prime Focus has already been a successful emblem in its business venture across North India. Now they are here to bring forth a revolution in south industry. After particular phase of VPF charges, the projectors become a property of theatre owners, which is completely absent here in South India. But now, everything is going to change with the aid of Prime Focus and Microplex as they will be providing them with the appropriate projectors. Getting a Mastering Unit for Producers Council has been a long run dream of Vishal sir and it is now becoming a reality.”

Ranjith Thakumar of Prime Focus said, “We are actually forming this association to bring a good change. We always believe that the business facilitates everyone working within the industry. Our main focus to give the ownership of the equipment based on the appropriate plans that we are discussing now, which will definitely benefit everyone involved in the circle of this business.”