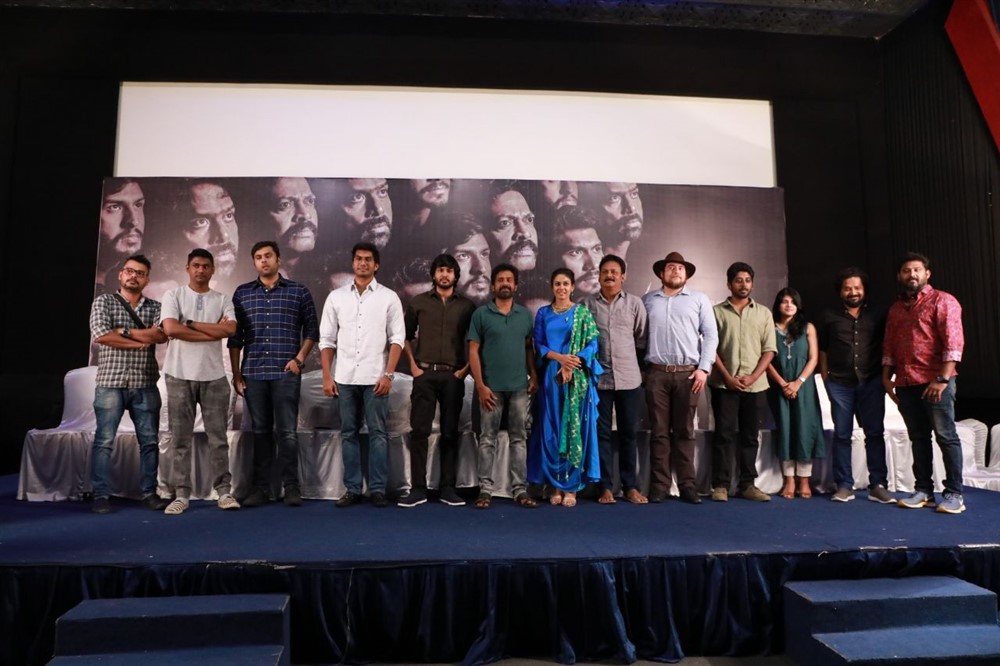 The innovational spell of Vanjagar Ulagam has been loudly witnessed in every aspect of its process. Right from the first single track that came with a western-classical fusion work followed by teaser and everything, the film has been setting a unique platform through its creative approach. Apparently, so was the press meet that was held this afternoon in Chennai, where the media channels and special invitees were offered a surprise. Usually, it happens that a particular scene would be played as preview from a movie, but it was astonishing to see the makers come up with a bold attempt of screening the first 25 minutes of the film along with trailer.

Aftermath, the cast and crew of Vanjagar Ulagam interacted with media.

Producer-Director Manoj said, “The pre-production works of Vanjagar Ulagam took it long phase of nearly 1 ½ years. Being so thankful to the entire team that travelled besides him, the first person whom I would like to thank is Suresh Chandra sir, who made things enlightened to me about the process of meeting people and getting the appropriate things. Guru Somasundaram sir will be absolute delight to everyone watching the movie in theatres. Although, Sam CS and I had lots of creative difference of opinions, it has all turned to be perfect over the output.”

Actor Guru Somasundaram said, “I loved the working ecology of the film, which was absolutely stunning. I was never coming across a situation, where I had to question about my characterization or its erstwhile scenes or next one to arrive. Writer Vinayak was completely present beside him and with so much intense care and detailing to my characterization, I could perform very well giving my inmost efforts. I would label Vanjagar Ulagam as a different craft work in my career till now.”

Actress Chandini, “Manoj is so calm and composed who knows his craft and the pulse of audience so much…. We as actors in the film are so much privileged to have the wonderful writing by Vinayak. Vanjagar Ulagam is an out and out commercial entertainer. Just as the trailer had a good response, I believe the film will have the same reception.”

Music director Sam CS said, “Soon after the success of Vikram Vedha, I got a call from Manoj asking to work in Vanjagar Ulagam. But I was little reluctant to work in back to back gangster based movies. But when I happened to see the raw footages that were shot for the film, it was like watching a Hollywood movie, which had a splendid lighting and visuals. Moreover, when I started hearing the script, I could feel the freshness throughout. Many would be asking me on who’s playing the hero character in this film. My answer is that every character in the film is a protagonist.”

Actor Sibi – “I am extremely thankful to my family and friends-director Manoj and writer Vinayak. We have been friends from our school times. I am elated that Vinayak wrote the strong character and wanted me to essay it. When we started the film before 2 years, it was a regular and ordinary one. But as the time proceeded, lots of big names got involved. To have a versatile actor like Guru Somasundaram into this project is a real bliss.”

Actor Visagan had his speech rendered with an English accented Tamil as he hasn’t been India for a very long time. He said, “My Tamil is little odd as I haven’t been in the country for a very long time and director Manoj has dubbed for me. When I got into films, I never knew anything about the film. But it was the cast and crew that spoon-fed me. Obviously, working with Azhagam Perumal sir, John Vijay sir and Guru Somasundaram sir is really energetic. I have known Manoj from school days and I am still unaware why he offered me such a role to perform, but am happy to see that his vision has come true.

Editor Antony – “It’s a kind of different and whacky film for me. The film went through different layers of editing and we thoroughly enjoyed it. Till now, I don’t get to see Manoj as a director for his sangfroid nature persisted throughout the process. But his vision is so much excellent and it has been proved with the output.”

Actor John Vijay said, “Every time I used to watch Guru Somasundaram perform in unique roles for every film, I used to wonder how he is able to make so much difference. It’s like an Indian make of Reservoir Dogs and it’s sure everyone will definitely love it. I am sure Vanjagar Ulagam will be a film of world standard. Manoj has been a task master scrupulously involved in modifying my performance and body language. But when I see it as a final output, it’s astounding.”

Filmmaker-actor Azhagam Perumal spoke on the occasion, “It’s so nice to see the passion that he carries for films and am so much floored by his professional gesture. It feels so great to be a part of this movie.”

Actor Jayaprakash – “For an actor to perform well on the sets, there needs to be a perfect ambience, which the team created for me. The title is ‘Vanjagar Ulagam’ (World of Jealousy), but the entire team that was involved in the project never possessed a bit of such traits.”

Stunt Choreographer Stunner Sam, who is always known for man of few words started off with a jocular note, “Speaking before mike is tougher than performing the riskiest shot,” and continued to add, “I am so happy that the film has come out well. Everyone has done a great job in the movie, especially in performing my stunts.”

Singer Swagatha, who turned the spotlights on with her rendition for Kannanin Leelai said, “The song was a surprising experiment, where we never envisaged a Carnatic song for a gangster action sequence. It has been very well packaged and delivered neatly by director Manoj Beedha.”

Story and dialogue writer Vinayak said, “I and Manoj have been close friends from our school days.

Cinematographer Rodrigo Del Rio Herrara said, “I thank the entire cast and crew for giving a great opportunity to work here in Chennai and India. I am really happy about the hospitality and cultural exchange that I received during this movie, especially Manoj, who had patience and ambition to make it a best film.”