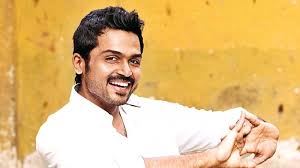 A non-stop work mode indeed!!! Karthi being an actor is almost synonymous to ‘Globetrotter’ for almost all his films are shot across different plains and hills on the map. Last year was much illustrative with his magnum opuses like “Kaatru Veliyidai” and “Theeran Adhigaaram Ondru”. While his journey into the green pastures of farmlands with ‘Kadaikutty Singam’ will be hitting screens soon, Karthi is back flying across the exotic locales for the shooting of his upcoming film ‘DEV’.

Touted to be a mind-boggling action packed entertainer, producer S Lakshman is burning candles at both ends to ensure that ‘Grandeur’ isn’t compromised in any aspects, by spending 55Crs into the project. It will be an out and out action flick laced with adventure and comedy too. The first leg of shooting was held across the city of Chennai.

Now the entire crew is flying down to Hyderabad, where the new schedule will be filmed from tomorrow. This 10-day phase will involve filming breathtaking action sequences, especially a mammoth car chasing block and a song. Following this, the crew will be shooting some of the edge-seated action and thrill scenes across the backdrops of Himalayan and European backdrops. Apart from this, the film will be shot in exquisitely paradisiacal locales of USA as well.