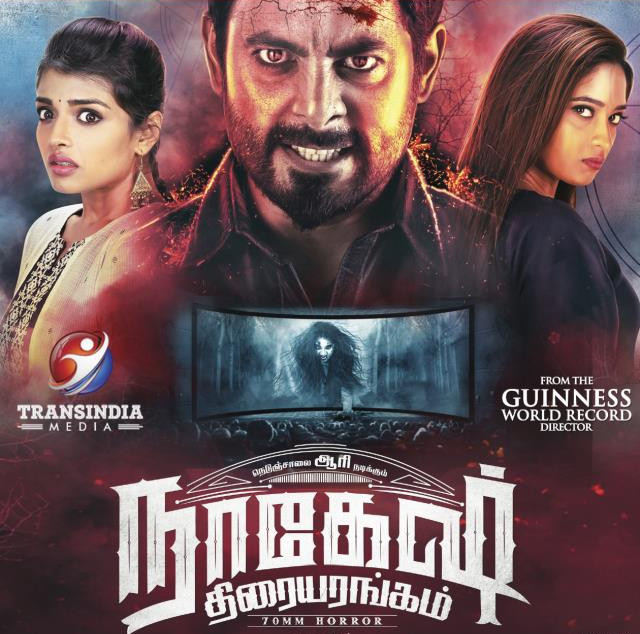 People are used to watching ghost movies in theatres, whereas in Nagesh Thiraiarangam, it is a theatre which is haunted by spirits.

Aari is a real estate broker who strives to make a name of himself but has got no reputation. Despite many people suggesting that he should look for another job he keeps persisting with this one.

He has a sister whose marriage is his responsibility. He decides to sell his old theatre. This is not an easy task as the place is haunted and no buyer to risk their money and life.

Is Aari able to sell the theatre, what is the backstory of the ghost form the rest of the movie.

Aari who has natural acting skills has once again showcased his potential, however there is lack of depth in his character.

Ashna Zaveri comes as the regular heroine in a horror flick and does not have much to do, other than playing the love interest of the hero.
The humour section is taken care of by Kaali Venkat, who evokes laughter in bits and pieces.

Athulya Ravi’s character is kept a suspense and she has done a decent job in the role. Director Mohamad Issack has taken up a usual horror movie line but has shifted the base to make it interesting.

The first half is your usual build up in a horror movie, however the second half has some scenes that interest the audience with a social message.

The low budget film has also affected the presentation of the movie which irks the audience. Srikanth Deva’s music is above average and one of the strengths of the movie.

On the whole, Nagesh Thiraiarangam is a stereotype horror movie which delivers a social message.
Rating: 2/5 – Horror movie that does not scare