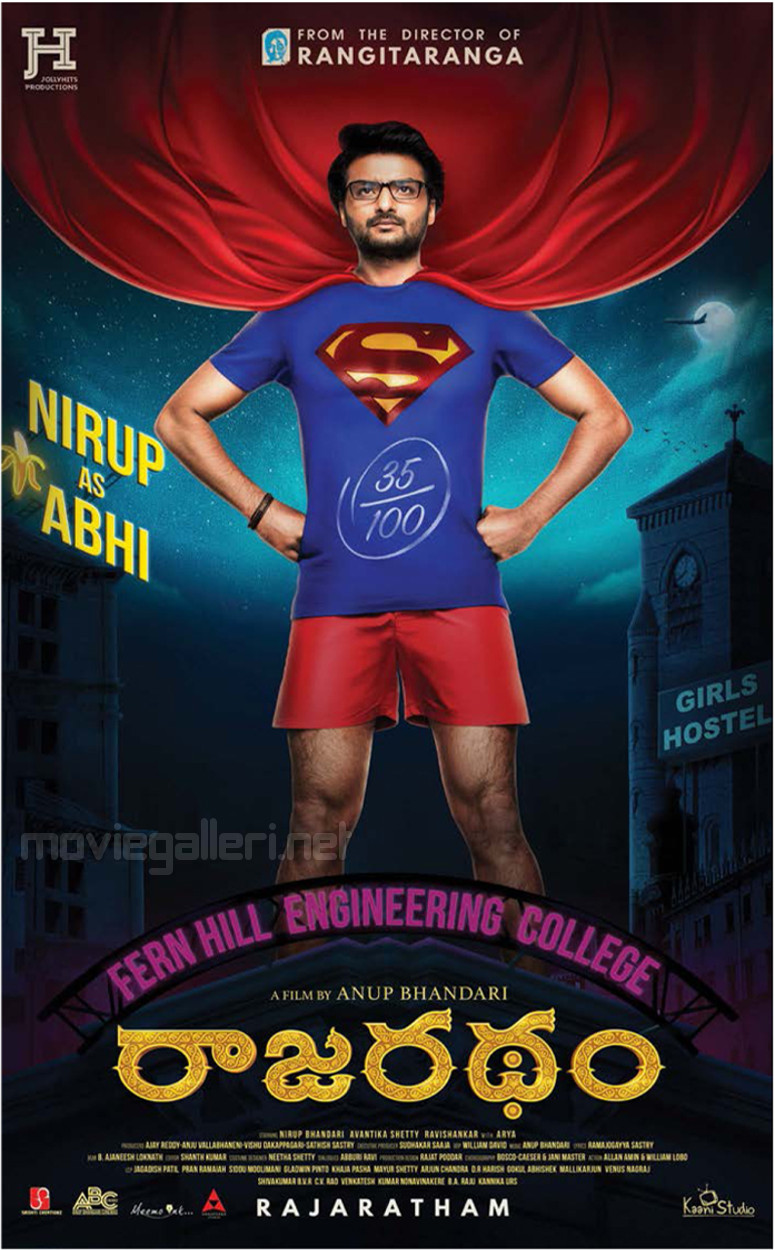 Nirup Bhandari, the tall and handsome hero of blockbuster movie ‘RangiTaranga’ which went on to become one of the 305 films short listed for oscars, is now making his debut in Telugu with ‘Rajaratham’ co-starring Raja Rani star Arya and Avantika Shetty. It all happened when Ajay Reddy Gollapalli of Jollyhits Pvt. Ltd., liked ‘RangiTaranga’ and was all praises for the work of director Anup & actor Nirup. Impressed by the immense talent of this duo, he wanted to join hands to make an entertaining film in Telugu. The result is ‘Rajaratham’ written & directed by Anup Bhandari with Nirup Bhandari in the lead.

Ajay says “I was in awe of his height, screen presence and his baritone voice. I felt that he would be loved by the Telugu audience as well”.

Now ‘Rajaratham’ team is releasing Nirup’s character poster. The poster is conceived by Anup Bhandari & Kaani Studios, shot using the latest hasselblad camera by bollywood professional Manish Thakur. The poster has him standing on top of a college building in a funny superman attire with 35/100 etched on his shirt. There is a subtle introduction of a character in the film called Mr. Banana. The poster eﬀectively conveys the comical nature of Nirup’s character as Abhi. They have also revealed 4 diﬀerent looks of Nirup & in one of them he’s dressed up in a Tuxedo holding the Banana & suitcase which seems like a tribute to the iconic James Bond pose.

‘Rajaratham’ is a romantic comedy in which Nirup is portraying a romantic goofy college boy’s character. As a child artist Nirup Bhandari had acted in a TV serial ‘Jolly Jolly Picnic’. He always wanted to become an actor. He shaped his acting skills in theatre group ‘Misfits’ under guidance of acting Guru Ratan Thakore Grant. Then he acted as a psychopathic killer in a Telefilm ‘Advocate Arjun’ produced by UTV. His performance got him the lead role in ‘RangiTaranga’.

Mumbai girl Avantika Shetty, who is also part of ‘RangiTaranga’ team, is essaying the female lead for Nirup in ‘Rajaratham’. She has acted in many ad films with several celebrities including our own Allu Arjun. “Avantika is a very talented actress trained in Anupam Kher’s acting school. Her performance played a pivotal role in the success of ‘RangiTaranga’. Especially in the climax scene she brought tears in everyones eyes. It is great working with her again” said Nirup Bhandari.

Nirup’s upcoming movies include a multi-starer with power star Puneeth Rajkumar & another Telugu super star, directed by Anup Bhandari. In his next movie, Nirup is acting with popular heroine Radhika Pandit. This movie is written and directed by Priya, Maniratnam’s associate director and produced by Rockline Venkatesh with music by Anup Bhandari. This is followed by a gangster flick in Telugu written by Bhandari Brothers: Anup – Nirup, directed by Rishab Shetty of ‘Kirik Party’ fame.

Nirup is a 100% committed actor, who is not scared of taking risks. During ‘RangiTaranga’ shoot he had to do spin dance on a wet floor. He did a fantastic job but in the last leg he slipped and had a near fatal head injury. In ‘Rajaratham’ also he refused to use body double and risked himself in a stunt performance, ending up with two fractures in hand. Doctor advised him to take two months rest; due to this the title song shoot is delayed & will be choreographed by Jani Master.

‘Rajaratham’ has six melodious and foot tapping songs composed by Anup Bhandari and lyrics written by Rama Jogayya Shastri. The dialogues are penned by Abburi Ravi.

Tamil Star Arya is playing an important role in ‘Rajaratham’. He said, “Nirup is always calm and composed. Don’t mistake, when the director says ‘action’ he turns in to a bundle of energy, gets in to the character and gives it life. And not to mention, he looks super handsome on screen”.