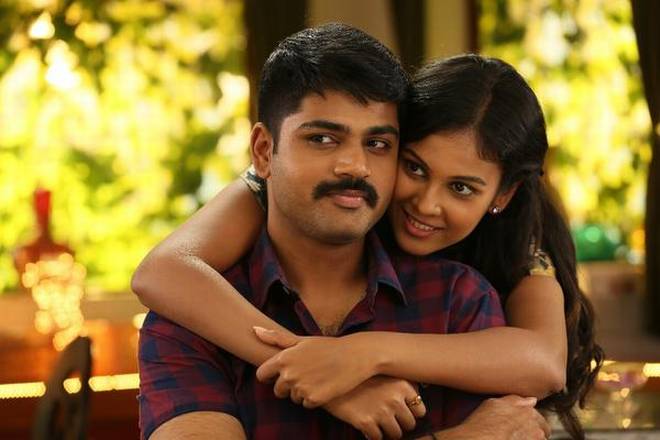 Raja is police constable who falls in love with Ranguski who lives in the same villa. Ranguski is someone who does the opposite of things that someone tells her to do.

Knowing this, the hero calls Ranguski as an anonymous person and warns her not to talk with Raja. As expected she does not listen to the caller and starts to mingle with him.

In a sudden turn of events Raja gets a call in his own voice which threatens to kill Ranguski. When he is involved in finding out who the unknown person is, his neighbour is murdered in a mysterious way and he is seen as the prime suspect.

Who is the murderer? Was Raja able to find him and prove his innocence, what happens between Raja and Ranguski forms the rest of the story.

Sirish as Raja suits the role of an innocent cop well and has done a decent job. However he has to work on his expression in his future flicks.

Chandhini as Ranguski as an important role to play and carried the character in an appreciable manner. All other characters in the movie have done their part well.

Director Dharani Dharan has tried to make a crime thriller and the first half looks engaging, however the movie lags in the second half as it becomes more or less predictable.

Considering the number of thriller movies that are released in the recent days, the plot could have been made more engaging. However, there are enough twists in the movie to keep the audience engaged. Yuvan Shankar Raja’s BGM is one of the biggest strengths of the movie.

Raja Ranguski joins the long list of crime thrillers released in the recent days and is a watchable flick.