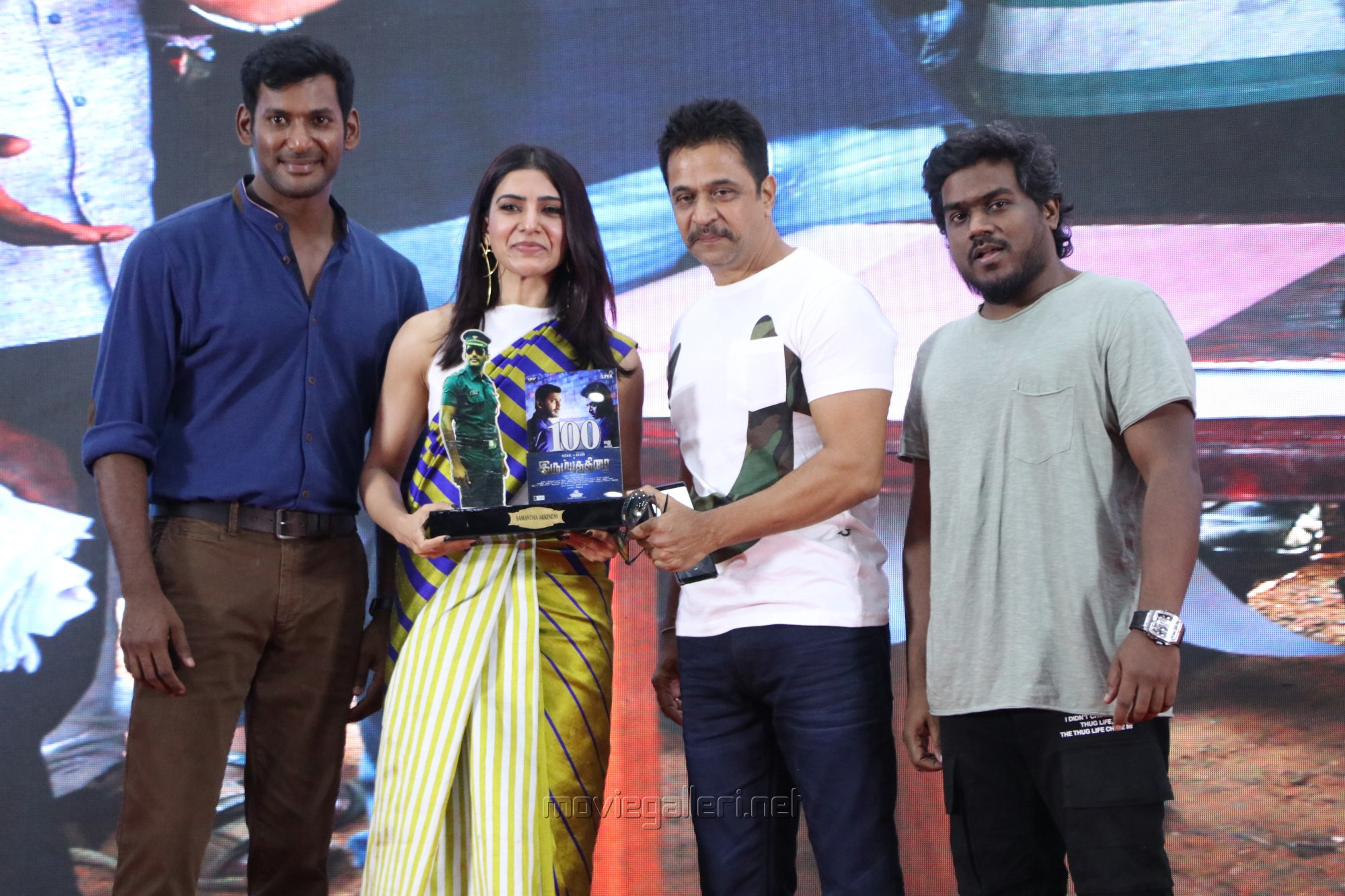 So much joyful downpour was seen all over the premises of Kalaivanar Arangam in Chennai, where the entire team of Irumbu Thirai was present along with the most prominent personalities of Tamil film industry gracing over the occasion. The occasion commenced with the lighting of lamp by Vishal’s mother, Samantha, Kutty Padmini and few more.

The first one to come upon the occasion was SA Chandrasekhar. He said, “One who respects his parents will have more success and fortune. I have been following it and so are my descendants too. Similarly, my brother Vishal has been doing the same with respect to his parents on this stage now. There are only two personalities in the entire Tamil film industry who took bold attempts of investing money to make their sons become heroes. One happens to be myself and another one is GK Reddy sir. He was sure-footed of turning his son into hero and made it happen now. Not all parents have that heart to come up with such a gesture.” He continued to add, “Vishal! Never compromise with what you are. Travel with your own values and don’t leave it anywhere.”

Director Lingusamy – “The first and foremost reason behind the film completing 100 days is the strong content with reality revolving around the cybercrime and how everyone has become victim to it. Of course, this is the first time in Tamil cinema, a film with such an intriguing theme has been made, which appealed to the interests of universal audiences. There are few things that I really love about Vishal. He is still the same with his physique as he was in first part of Sandakozhi. The other thing is that my relationship with him has existed from my days as assistant director under his father’s production. Although, I was a last assistant for that project, Vishal as a school boy would be more attached to me and would take me to all the restaurants he visits and buy me clothes in the same showrooms, where he purchases. This was the reason, why I was so happy to direct him in Sandakozhi after directing top heroes like Mammootty, Madhavan and Ajith Kumar. Recently, his mother took a promise from me that I would take Vishal to offer special prayers at Madurai Meenakshi Amman Temple for his marriage. I am sure just like he would soon become the leader in many aspects, so would be his marriage…”

Robo Shankar on his part added saying, “These days, few films have become disgusting with its title and themes. There has been a huge confusion prevailing among the audiences whether to watch the film along with family or alone. But, it has been a great relief to watch a movie like Irumbu Thirai, which had a tremendous theme of unravelling the reality behind the technological advancements. I am really happy to be a part of this film.”

Filmmaker Sundar C delivered an emotional speech saying, “My friendship with Vishal started on an actor-director relationship. But as the days proceeded with our projects, our bonding got much intense and we are now like brothers from different parents. The greatest secret of Vishal’s success is his good hearted nature to do good things for others. It’s such a rarity to see such people in today’s world, especially in Tamil industry. Be his personal heeding towards the needs of people around him or his deeds as mission through Nadigar Sangam and Production Council. He has been attempting to bring a great change in the industry and already many have started questioning him regarding the promises he made. It’s like asking a 2-month pregnant lady to deliver the baby. So I request all the producers to stay united and keep supporting him. I wish all the success to win the forthcoming elections as well.”

Director Mysskin, “While we decided to work in Thupparivalan, both our close circle warned us not to work with each other. While he was told to be a tough one, I was claimed as a ‘Psycho director’. But then, as we started working together, I strongly realized one thing. I have made around 10-15 movies so far, but Vishal happens to be the only actor-producer who took care of me so well. My relationship with Vishal is beyond any conditions. I don’t believe in God, but if there is someone like that, I would pray asking to limit my lifespan to just 50yrs as I am already bored to live. The rest of 25yrs to Maestro Ilayaraja and another 25 years to Vishal… He is a 6ft tall baby, who
always thinks about good things and doing good things to others.”

Director RK Selvamani said, “Vishal might look so much crude from outside, but he is someone, who will do anything for the sake of friendship. I would always request Vishal during the tough times over his responsibilities. I would tell him to take up the same route as Captain Vijayakanth to act and produce couple of movies. A person’s first and foremost duty is to make his family happy, then the people around him followed by the industry he is involved in and then for the society and country. He has been actively involved in all such activities and I request him to do more for the industry as he is doing now.”

Yuvan Shankar Raja said, “I don’t know to talk much. I wish a very happy birthday to Vishal. Content is always the winner and I appreciate Vishal for choosing the right content.”

Editor Ruben said, “These days, reviewers have become more than audiences. Everyone has started being a critic finding more opportunities to analyse and criticize the movie… Amidst all such constraints, it’s nice to see a movie like Irumbu Thirai make a good show here.”

Actress Samantha said, “The success of Irumbu Thirai is a real big one. I thank the entire team for the great support they extended towards me.”

Filmmaker PS Mithran – “I have seen Vishal’s 3 birthdays, 3 elections and 3 strikes. But beyond the entire long span, I am feeling more emotional now. Everything happening is now something unexpected. I never thought that the film would go for a 100 day show and then there would be a celebration with everyone taking part in this occasion.”

Action King Arjun said, “Irumbu Thirai had so much of finest things. Especially, actor Vishal for being so much bankable on this script and his ability to make it happen through as a producer… Next, it’s captain of the ship. PS Mithran, who had done a real big job with his script and translating them into celluloid… It really deserves a herculean task to carry out the entire process.”

Finally, he said, “Regarding Vishal’s leadership qualities, I would say that anyone can become a leader if they have a good heart for the wellbeing of others. It doesn’t mean, who it is or from where they come from. They must be an Indian and that’s more enough. Everything cannot be inherited in a short span of time, it will happen as onE proceeds with good heart.”

Finally, as Vishal came upon his turn to render his vote of thanks, many fans started hailing him as ‘Future Chief Minister’, he instantly slammed them down saying, “Do you think, is CM post something like a class monitor post. Anyone who does a good deed individually is a CM in Tamil Nadu.” He continued to thank everyone from the team of ‘Irumbu Thirai’.

“My first salary in film industry was 100 rupees on Day 1 shooting from Arjun sir as assistant director. He owns all the credits for helping me earn during that time. If Irumbu Thirai has completed 100 successful days in Tamil Nadu followed by a huge hit in other regions, it’s only because of Arjun sir. If not for him, this would have been a regular movie with a span of 3 weeks or at the least 50 days.”

He continued to tot up saying, “It’s not just me, but everyone has been doing good towards the society. Samantha has done really big things beyond our imaginations and so are the others here. It’s not that everyone must become politician to do good things. Everyone who does good things are themselves leaders.”

There was something special about the occasion, where Vishal as usual didn’t want any bouquets to be delivered as gift. Instead, the respective amount of money was used as a contribution towards the education of two girl children – Keerthana and Aishwarya.

While everyone from the team of Irumbu Thirai got felicitated with the trophy memento for their work, Vishal didn’t have such turn. It was later revealed that he took it last night from a girl named Akshaya from Canada with vision impairment from her birth and a huge fan of Vishal from childhood, who can utter the film’s name just by hearing the dialogues from any of his films.