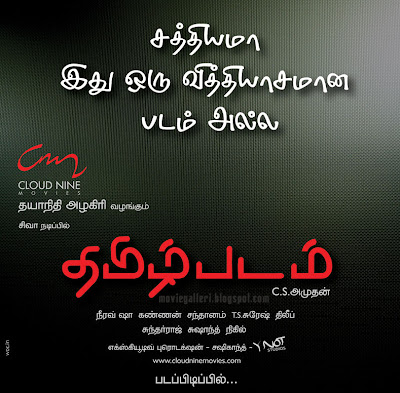 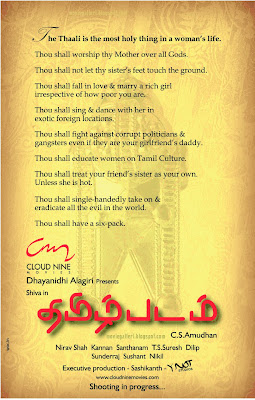 Union Minister and DMK strongman M K Alagiri’s son Dayanidhi Alagiri made his entry into filmdom with ‘Varanam Aayiram’. After releasing the Suriya starrer worldwide, he is now planning to make a series of films.

First in the list of movies to be produced by his Cloud Nine Movies is ‘Tamil Padam’, a film by ‘Mirchi’ Siva, the RJ turned actor. Media partnered by IndiaGlitz, the movie is said to be a satire on so called commercial movies of Tamil cinema.

With mostly new faces in lead roles, ‘Tamil Padam’ would be on the lines of Hindi hit ‘Om Shanti Om’, according to sources. Proving this, newspaper advertisements of the film took a comical dig at some of the clichés that a typical Tamil cinema hero would follow